'Killed for speaking the truth': 9 journalists murdered in 2018

Over 30 journalists – including Jamal Khashoggi – have been murdered so far this year. With the help of colleagues and relatives, or in their own words and pictures, we pay tribute to some of them here.

Maharram Durrani, 1990–30 April 2018
A trainee producer and presenter at Radio Azadi in Afghanistan, Durrani was one of at least nine journalists killed by a suicide bomb while making her way to work in Kabul.

Malali Bashir, a journalist, TV and video producer for RFE/RL’s Afghan service and a colleague of Durrani: “The bomb was a deliberate attack on journalists. As they lost their lives one by one, the whole office was in shock. I can’t explain the situation we were in. We didn’t stop the broadcast. Everything was live ... We were being professional, we were giving the facts, we were being balanced, but still, it was emotional because you lost a colleague that was in contact with you yesterday.

“Maharram had been hired to work on a weekly programme focused on women’s rights and women’s issues. She was the main financial supporter of her family. She told her father she would be like a son, she would be the breadwinner. Her father said she refused to get married because she wanted to keep supporting her family financially. He said she was very courageous and brave.

“She was a soft-spoken, very modest person but with great potential as a journalist. We don’t have many females on the ground, especially women who are very interested in covering issues related to women. This is a tragedy. She was still in training ... she didn’t even finish the first programme.” 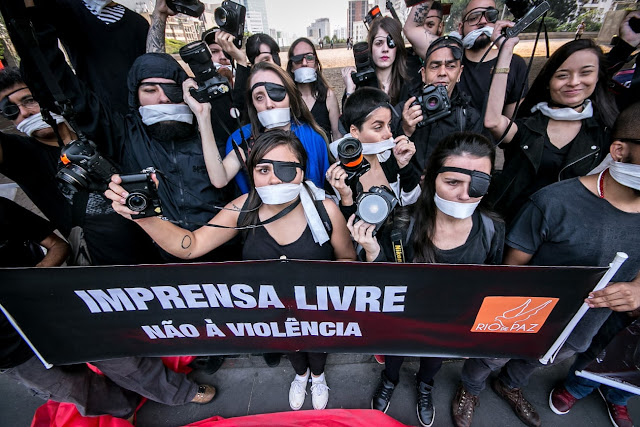 Jefferson Pureza Lopes: 17 November 1979–17 January 2018
A producer and radio presenter for Rádio Beria Rio FM in Brazil, Lopes fearlessly criticised local politicians and highlighted corruption. He was shot dead in his living room. No one has been charged with his murder.

On 19 November 2017, a few months before he was killed, the radio station at which Lopes worked was attacked and burnt down. Lopes uploaded a Facebook video showing the wreckage and insisted the station would soon be back on air. 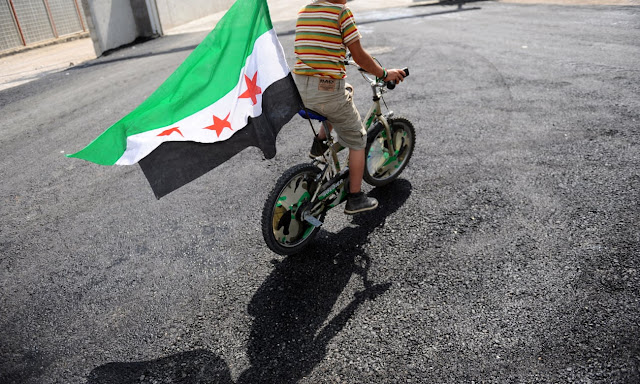 Ibrahim al-Munjar: 1992-17 May 2018
The correspondent for Syrian news website Sy24 was killed outside his house by an unknown group in May.

Ghaith Hammour, the founder of Sy24 and al-Munjar’s editor: “Ibrahim was one of our stringers in the south. He did everything. We don’t have the luxury to have people in front of the camera and behind the camera. When he did videos for us, he was the cameraman, the storyteller and the story editor. He was the one who got the story. He’d tell us how he’d do it and we’d help him to make it better.

“One particularly great story he did was about the children living in Daraa who, at the start of the revolution, did some graffiti calling for Assad to go. Some of these kids were tortured and arrested. In 2018, Ibrahim followed up with one of these kids, now a man. It was one of the best stories he ever did.

“He’d had several threats from Isis and from the regime. He moved house several times, but unfortunately he was killed in front of his house.

“Ibrahim was so quiet, but he had a great eye and developed himself over the years and became one of the best cameramen in the area. When he died, our whole office was devastated. We don’t know who killed him. We can’t be sure, it’s Syria. And Syria is the most dangerous place in the world to be a journalist.” 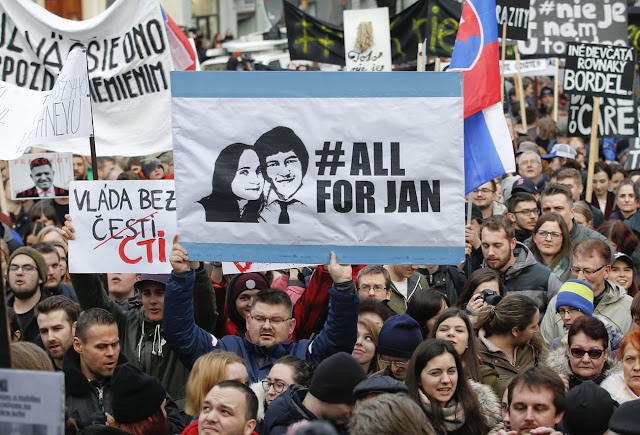 Ján Kuciak: 17 May 1990–21 February 2018
In February, the bodies of Kuciak, an investigative journalist for the Slovakian news website Aktuality.sk, and his fiancee Martina Kušnírová were found in their apartment: both had been shot, with no signs of a struggle.

Pavla Holcová, a Czech journalist who worked alongside Kuciak on his last investigation: “He was a village man in the best sense of that word. He was modest, he didn’t get into fights. He was a silent guy, but the type of man who wants to know how the world works. He loved digging and going through documents and making the mosaic of the information come into focus.

“We worked together on the Panama Papers and the Paradise Papers but, for the 18 months leading up to his death, we’d been exploring a huge story about possible links between the Slovak prime minister and a branch of the Italian mafia, the ‘Ndrangheta.

“Jan and his fiancee were planning to get married … His editor called me the morning after their bodies were found and told me I needed to get police protection. We spoke again a day later and agreed that we had to get the story out as quickly as possible, and a coalition of journalists worked on the piece and did incredible work to release it across a number of outlets.

“I didn’t feel much when the Slovak prime minister resigned soon afterwards. My job is to provide information, not to take down politicians. Journalism is facing a kind of crisis around the world. But maybe soon we will hit the bottom, and then we can come up with a better kind of journalism, for the 21st century.” 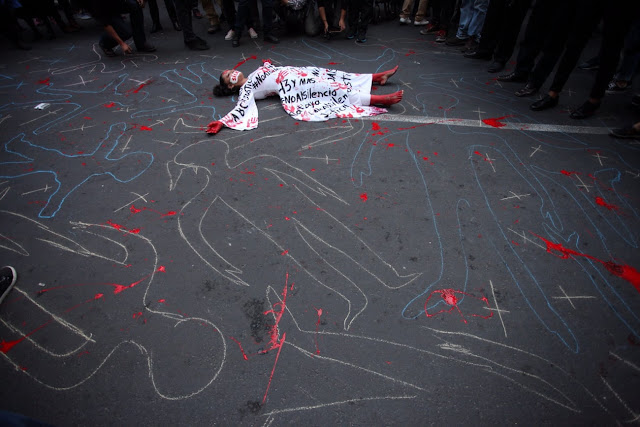 Leslie Ann Pamela Montenegro del Real: 1982-5 February 2018
The journalist and YouTuber ran a satirical YouTube channel as “La Nana Pelucas” (the Grandma in Wigs), and an online news magazine, El Sillón. She was killed by a gunman who walked into the restaurant she ran with her husband and shot her in the head. Del Real was one of five Mexican journalists murdered this year, along with Jesús Alejandro Márquez Jiménez, Carlos Domínguez Rodríguez, Leobardo Vázquez Atzin and Mario Leonel Gómez Sánchez.

‘Nana Pelucas’ as she called herself poked wicked fun at local politics, corruption and government officials in her regular vlogs, such as this one, where she mocks the relatives of then Mexican president Enrique Peña Nieto. She received a number of threats from criminal gangs in the year leading up to her murder. 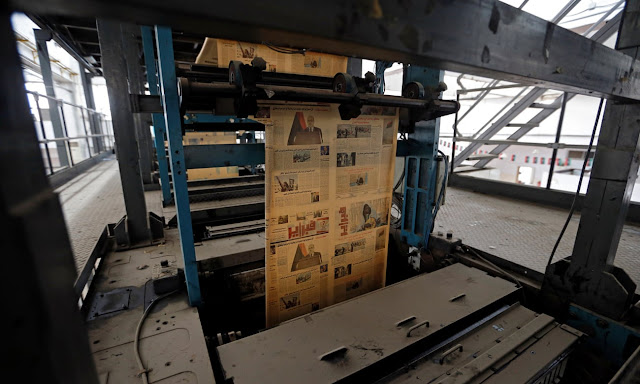 Musa Abdul Kareem: 1994–31 July 2018
The photographer and editor for the Libyan newspaper Fasanea was abducted by unknown assailants and later found shot dead with signs of torture.

Salima Bin Nozha, Fasanea’s editor-in-chief: “Musa had joined the paper in 2015. He was a humble man, who was happy and full of life. He was a photographer and later also became an editor.

“He loved helping people, especially the poor. He was always giving back to the community. He often raised money to support people on low income or those in desperate need of help. He loved listening to music and enjoyed drawing. If you needed help with anything, he was there.

“There’s a civil war in Libya and extremist groups like Daesh roam freely in the country. There’s no safety here or the rule of law. Everyone does what they want. In 2017, another colleague of mine was killed and, separately, a female journalist was killed. Journalists are being killed because they are speaking the truth.

“In Libya, we don’t have freedom of speech. It’s very dangerous to be a journalist here. Still, his death came as a huge shock to us. It’s unbelievable that someone like him was kidnapped and murdered. We were horrified by his death. We continue to report because we feel it is our duty to show what’s happening in our country. We’re doing our best to make sure the truth gets out there.” 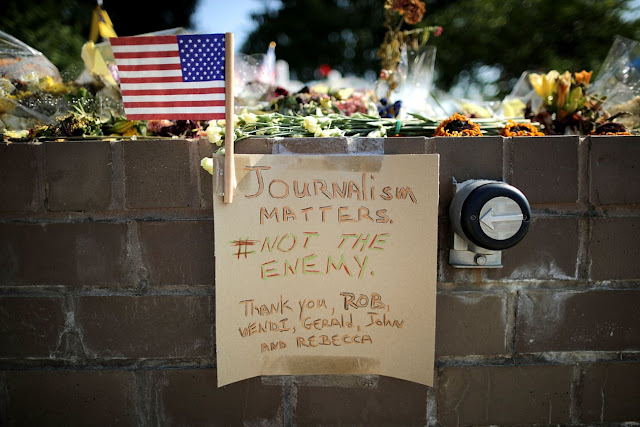 Rob Hiaasen: February 1959–28 June 2018
Flowers and a hand-written note laid outside the Capitol Gazette offices in Annapolis, US
An assistant editor and columnist at the Capital Gazette in Maryland, US. On 28 June, Jarrod Ramo, who had been sending threats to the newspaper for some time, entered the offices and shot and killed Hiaasen, along with Gerald Fischman, John McNamara, Rebecca Smith and Wendi Winters.

In May, Hiassen wrote a piece about Mother’s Day:
“I can’t pick up the phone to call my mother any more. Poor, selfish me. But Sunday was our day to talk on the phone. She was in Florida; me in Maryland, as was our chronic geography.

“Because of her, I came to believe the only questions worth asking are personal. What a gift for someone to lay low in silence just to hear your answer. It’s how people begin to trust one another. It’s how people fall in love, you know. Might be how we stay in love.

“If you’re lucky, you don’t wait too damn long to grow up and appreciate your parents. (She would not have used damn and would have questioned my use of it. So, in her honor, a redo.)

“If you’re lucky, you don’t wait too long to grow up and appreciate your parents.” 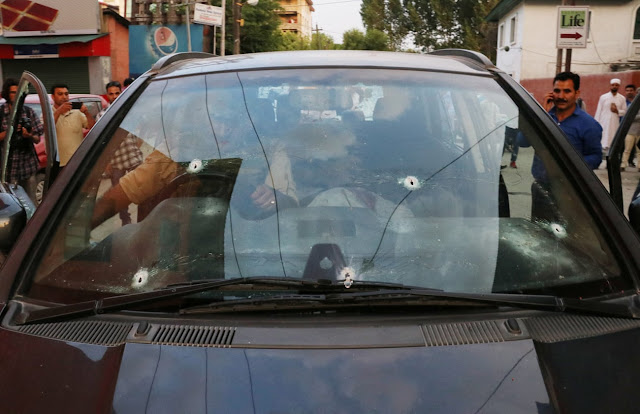 Sameer Yasir, a senior journalist and friend: “Shujaat would go out of his way to help you if you had a problem. I was once stuck in an airport in Colombo and I had a friend with me and he had some visa problem. I told him we had a problem here and he called someone in Sri Lanka and got it fixed. He was that kind of man.

“Just before he was killed, I saw his car moving and I waved my hand towards him and he was smiling. He always had this special smile. He said he’d call me back or maybe he’d send a text message. 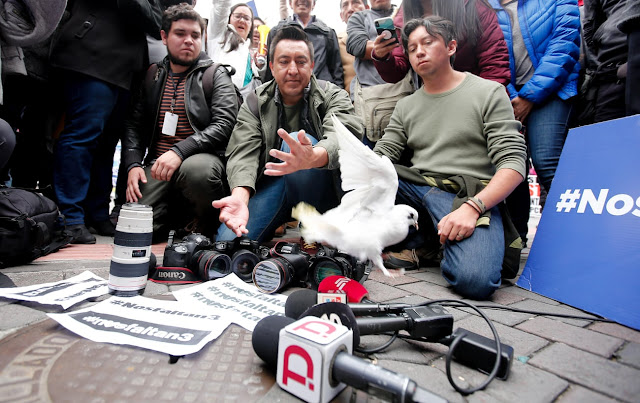 Paúl Rivas Bravo: 25 April 1972–April 2018
Friends and colleagues of kidnapped journalists demand their freedom in Quito, Ecuador.
The photojournalist for Ecuadorian daily El Comercio was on an assignment with the journalist Javier Ortega and driver Efraín Segarra when the three were abducted by a dissident drug trafficking group and killed.

Ana Maria Carvejal, a friend and colleague: “Everyone loved Paul. He made friends everywhere he went because he was always interested in people’s stories: the guy who looked after the car, the waiter, the taxi driver or whoever was taking him on a boat ride.

“His last trip was to an area on the border between Ecuador and Colombia. Since the peace agreement in Colombia that demobilised the Farc, some of the criminal elements within the old guerrilla groups are still armed, and engaged in drug trafficking and other activities. I spoke with him in the morning, but then I sent him other messages and he did not answer, and I began to worry. The next morning, the government confirmed that he, Javier and Efraín had been kidnapped.

“We formed a collective, #NosFaltan3 [“we’re missing three”] and went every night to the government centre to pressure the state to do as much as possible for their freedom. But a couple of weeks later, on April 13, we received the horrible news that they had been killed. Eight months have passed since the kidnapping and, seven months after the murder, it is still hard to believe that this happened.

“There is still very little progress with the investigation of his murder. It is very important to keep talking about him in all possible spaces. We want everyone to know that Paul was a sensitive man, straightforward, cheerful, smiling, teasing, supportive, protective, that these three men were great professionals and beautiful people.”

(Source: The Guardian)
Posted by Arjunpuri at 14:00