What if Indian states were countries

India is the seventh largest country in the world in terms of area and has the second largest population in the world at 1.36 billion. In 2015, The Economist called it “a continent masquerading as a country.” Taking this thought forward, CEDA is starting a series where we will look at how Indian states compare with other countries in the world.

In the picture above, we have tried to find countries comparable to Indian states based on GDP per capita (International Dollars, purchasing power parity). According to the World Bank, “an international dollar would buy in the cited country a comparable amount of goods and services a U.S. dollar would buy in the United States.” Purchasing power parity refers to the rate of conversion that equalizes the purchasing power of different currencies by eliminating the differences in price levels between countries.

For example, when we hover over Goa, we see that the GDP per capita (International Dollars, PPP) is $21,922. An equivalent country for Goa is the Caribbean country, Antigua and Barbuda with GDP per capita of $22,460. Goa is also the state with the highest GDP per capita in India. 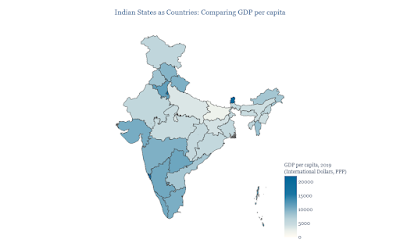 States domestic product for the year 2019 has been taken from the Ministry of Statistics and Programme Implementation. GDP per capita for Indian states has been calculated using official population projections for 2019 based on Census 2011 and figures in Indian Rupee have been converted to International Dollars on PPP basis using OECD’s conversion factor. Other countries GDP per capita for 2019 has been taken from the World Bank.

Author: Vibhav Khandelwal is a student of economics and finance at Ashoka University. Views are personal.