Until last week, 155 women from different parts of Kerala have worn the wedding outfits from Nasar’s Dress Bank in Thootha town, on the Malappuram-Palakkad border.

A 44-year-old man living in a remote village called Thootha on the Malappuram-Palakkad border of Kerala is following a new model for charity — Dress Bank. Like concepts such as food banks and book banks, Nasar Thootha offers clothes through his Dress Bank initiative. However, these are not ordinary clothes, but wedding attires for women from poor families, which are given free of cost. 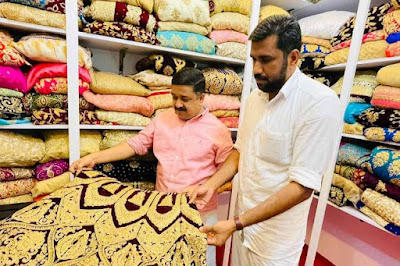 It was 1.5 years ago that Nasar, a Saudi Arabia returnee, introduced this idea to help brides from low-income families in Kerala. “After returning from Saudi Arabia, I was engaged in rehabilitating the homeless by providing them with shelter. During that period, I was also able to establish close relationships with many families in the region, and noticed that many parents were struggling to arrange wedding dresses for their daughters, which are usually expensive,” said Nasar, a native of Thootha near Perinthalmanna in Malappuram.

With the support of his friends, Nasar started the Dress Bank on an experimental basis in April 2020. He started the initiative in a room in his house near Thootha, with a set of 100 donated wedding outfits. “It was my family, including my wife, four children and my sister, who supported and assisted me in running the initiative at home in the beginning,” he said.

Using WhatsApp and Facebook, Nasar circulated posters, requesting people to donate their wedding dresses to Dress Bank. “The campaign was a success as many people from different parts of the state expressed their interest in donating their wedding outfits. We managed to collect the dresses from different locations through different charity organisations and our friends. After dry-cleaning these outfits, we started distributing the dresses to poor families in neighbouring regions when required,” said Nasar.

Nasar recently moved the Dress Bank into a rented building in Thootha town, situated on the border of Malappuram and Palakkad district.

“Any parent can directly approach me if they want a wedding dress for their daughter. We have more than 600 varieties of wedding dresses now. The outfits originally cost Rs 3,000 to Rs 60,000," he told TNM.

"The bride and parents of the woman can directly visit the Dress Bank and select the dress item that she needs irrespective of the cost of the item. We never ask them to return the dress after their use,” he said, adding that the store has dresses for all wedding customs of different religions and castes.

PT Noushad Ali, president of Aliparamba Grama Panchayat, where the Dress Bank is situated, said, “Initially, the project was beneficial for families from our panchayat and neighbouring panchayats in Malappuram and Palakkad districts. Now, many families from different parts of the state are coming to get these dresses,” he said, hailing Dress Bank as a successful model of charity.

Perinthalmanna MLA Najeeb Kanthapuram, who visited the Dress Bank at Thootha on Monday, September 13, said that Nasar’s charity initiative was beneficial to more than 150 families across the state and a blessing to many families who have been struggling to meet the expense of wedding function. “We usually wear our wedding dress once in our lifetime. If we donate it, it will be a great support for a woman from a poor family,” said the MLA.