Mahatma Gandhi disagreed with Rabindranath Tagore on many things. Here’s where they agreed

An excerpt from ‘Tagore and Gandhi: Walking Alone, Walking Together’, by Rudrangshu Mukherjee.

In spite of the divergence in their philosophical and spiritual perspectives, there were some fundamental issues on which they were in complete agreement. These are no less important. One was their commitment to service which was at the core of what Rabindranath, in his first letter to Gandhi, referred to as their common sadhana. Gandhi embodied service to the people. This was his calling, his life. He could thus say towards the end of his life, “My life is my message.” He made dedicated service for the common people a “talisman” for decisions, policies, etc.:

“I will give you a talisman. Whenever you are in doubt, or when the self becomes too much with you, apply the following test. Recall the face of the poorest and the weakest man whom you may have seen, and ask yourself if the step you contemplate is going to be of any use to him. Will he gain anything by it? Will it restore him to a control over his own life and destiny? In other words, will it lead to swaraj for the hungry and spiritually starving millions? Then you will find your doubts and yourself melting away.”

Gandhi’s commitment to service is so well known, it does not need any reiteration, but Rabindranath’s work in this sphere is less noticed as he is seen more as a creative artist.

From the time he began touring parts of the Bengal countryside to look after his family’s landed estates, he became concerned and then involved with the welfare of the people who lived in the villages. He wrote about these problems in his essays [...L]ater on in his life he devoted himself to the welfare and the development of villages around Santiniketan. His aim was to structure the economy of these villages to make the people self-reliant in an environment whose principle would not be self-interest but co-operation. He wrote:

“The symptoms of our miseries cannot be removed from the outside, their causes must be extirpated from within. If we wish to do this, we must undertake two tasks; first to educate everyone in the land, so as to unite them mentally with all the world...Secondly, to unite them among themselves in the sphere of their livelihood, so as to bring about their union with the world through their work.”

Rabindranath’s concern and dedication to service to the poor was reflected in his creative work – especially his short stories and in some of his novels. Witness Gora’s restless endeavour to work among and for the poor; and also the depiction of the character of Jethamoshai (uncle) in the novel Chaturanga.

For both Gandhi and Rabindranath, the dedication to service for the poor was integrally connected to their vision of swaraj. Neither of them understood swaraj as mere political freedom from British rule. This political freedom was to be complemented by the emancipation of human beings.

What constituted this dimension of swaraj? It was constituted by the ability and the empowerment of individuals to regulate and run their own lives independent of external institutions like the state. Individuals should have the strength to fearlessly conduct their own daily lives. Gandhi emphasised abhaya (fearlessness) and Rabindranath atmashakti (soul force) – the two notions were inseparable and could only grow out of service and responsibility. Rabindranath wrote, “For India, true freedom is social freedom: the freedom to do good...”

Rabindranath expressed his vision of swaraj in a famous song which roughly translated goes as, “We are all kings in the kingdom of our king”. If everyone was sovereign, there was no necessity for a king. Gandhi approximated to the same idea through his vision of “enlightened anarchy”. He wrote in January 1939:

“Political power, in my opinion, cannot be our ultimate aim. It is one of the means used by men for their all-round advancement. The power to control national life through national representatives is called political power.

Representatives will become unnecessary if the national life becomes so perfect as to be self-controlled. It will then be a state of enlightened anarchy in which each person will become his own ruler. He will conduct himself in such a way that his behaviour will not hamper the well-being of his neighbours. In an ideal State there will be no political institution and therefore no political power.”

Their vision of swaraj was embedded in ahimsa – another idea that converged in the sadhana of Gandhi and Rabindranath. For both of them, ahimsa represented a moral force which in India was pitched against British rule. It was, however, a moral force for the whole of humanity. Both had stood on the principle of ahimsa and had withdrawn from movements in which they had played a critical part when they saw those movements deviating from non-violence and deploying coercion and violence.

It was in one such conjuncture during the Swadeshi movement that Rabindranath had stepped aside from the movement and in great mental anguish composed that memorable song, “Ekla cholo re”. If no one answers to your call, walk alone. Gandhi made this song his life’s motto and lived it when he walked away from the Non-cooperation Movement after the violence at Chauri Chaura and then again in the last months of his life when he refused to be part of negotiations to partition India and walked away alone to Noakhali to pursue his life’s calling of service to the poor, of ahimsa, and abhaya.

Since ahimsa was one of the pillars of their lives, Rabindranath and Gandhi saw India (and the world) in terms of harmony, free from hatred of any kind, religious and racial. Their idea of India was inclusive and assimilative, and they were anguished when they saw that idea and ideal of India being ripped apart by sectarian violence.

Rabindranath was spared the tragedy of witnessing Partition and the communal violence that preceded and followed it. He had to suffer though the spectacle of global violence in the months before his death. Gandhi had to live through the violence of Partition, and according to those who knew him, was never quite the same person after that experience. He told Nirmal Bose towards the end of his life, “I don’t want to be a failure. But I may be a failure.” As an apostle of non-violence he fell a victim to violence.

Through the expressions of difference and respect for each other, Gandhi and Rabindranath set an example of debating and deliberating on public, social, and political questions. They formed a legacy of public reasoning. They debated without acrimony. This is an essential constituent of the Gandhi-Rabindranath heritage – a beacon as India walks the razor’s edge to fashion a society that is inclusive, free of bigotry and hatred, and informed by civilised discussion and discourse. Through their words and their deeds Rabindranath and Gandhi taught us to:

“...Sing with mortal voice...unchanged ...
Though fallen on evil days,
On evil days though fallen and evil tongues;
In darkness, and with dangers compast round,
And solitude; yet not alone...” 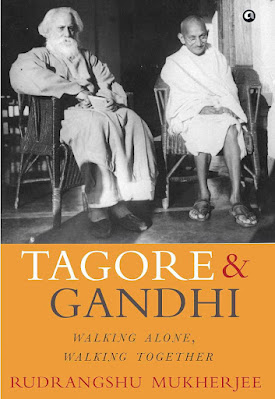