An excerpt from ‘The City of Good Death’ by Priyanka Champaneri.

When the boatmen found the body in the river, they should have thought nothing of it. There was nothing unusual in steering past floating arms and blackened buttocks, in putting an oar into the river and having to reposition it when you found a soot-streaked foot barring your way.

Everyone knew the Doms were cheap folk with no respect for proper funeral rites, greedy for the few rupees they might save by snuffing a pyre before the fire had claimed an entire body, dumping the charred corpse into the river, and selling the half-burnt wood to another gullible family too grief-stricken to know the difference.

The two boatmen had been out early, before the veil of morning fog lifted from the river. They shared a boat, one man at each end, and passed a bottle between them. They steered themselves to the middle of the river, to a spot shrouded in dense fog between the holy city of Kashi and the cursed far shore called Magadha.

Their spot was well chosen. Every man in Kashi knew three basic facts: dying in the holy city promised freedom from rebirth, bathing in the Ganges washed away the sins of a lifetime, and dying on Magadha guaranteed that you would come back as one of the lowest of the low, a donkey destined to bear burdens and insults until a merciful death started the cycle anew.

Here, the two boatmen hid their early morning libations from Kashi’s wandering tongues even as they kept a firm hand on the oars when the boat threatened to drift over to the cursed land. They sat and passed the bottle in silence, comfortable in a cocoon of mist, and they would have remained that way for some time if not for the interloper looming quietly in the distance.

An empty boat emerged from the fog and floated with unhurried purpose toward them. It thudded against the side of their craft and bobbed in a gentle rise and fall against the current, as if breathing, and the two men looked at it as they continued to pass the bottle, which they soon emptied. One boatman grabbed the side of the empty vessel and hoisted himself in while his friend held their own boat steady.

“This is Raman’s boat,” the first said as he rummaged through the scattered belongings. He held up a packet of mango beedis, which Raman was famously partial to, a pocket knife, a ball of jute twine, a glass bottle, some plastic envelopes of chewing tobacco.

“Anything in the bottle?” his friend asked. The bottle was as empty as their own, but the beedis were excellent consolation, and the two men shared the packet, musing over Raman’s negligence in allowing his boat to wander.

The story currently making the rounds in Kashi through the mouths of beggars to the ears of merchants and housewives was that the young boatman spent his nights and early mornings in the dancing alleyways of Dal-Mandi to see his beloved Chandra.

Smoke curled from both men’s nostrils and melted into the grayness that clotted the air. Ghostly shades of sound reached them: hollow knocks on wood, a barking dog, a bell clanging. When the beedis shrank to stubs too small to fit between their fingers, the men flicked the ashy remains into the river and readied for their return to the holy city.

The first boatman pulled at the fickle anchor that lay over one side of Raman’s boat.

“Pull harder, Bhai,” his companion said, laughing when the anchor refused to rise out of the water. “And perhaps limit the pakora during chai this week, nah?”

The anchor dislodged from some obstruction deep below, and the rope crawled upward, though slowly and with considerable effort. As the wet rope coiled into the open boat, what emerged from the water was not the customary iron weight, but a fist. That hand was attached to an arm, and the rope knotted around that arm was tied in a neat double knot. While his companion sputtered, the first boatman kept a firm grip on the cold arm, steadied himself, and pulled the rest of the body up and into Raman’s boat.

The man’s life had flown long ago, and the body that remained was dark and swollen. His mustache, made thin with water, framed his parted lips, and the hairs of his wet eyelashes clung together, the long tips reaching toward his cheekbones like thick drips of kohl. A scar split one of his eyebrows in two, and a gold chain spooled around his neck. His bare feet had hardened soles and talon-like toes, and his thick black hair released a steady stream of water onto the boat deck, as did his soaked cotton pants and shirt.

“The liquor has taken your wits – put him back!” the companion hissed. “Before anyone sees, before his ghost sticks to you – where do you expect you’ll get the money to banish it?”

“Yes, but look, he is wearing clothes.”

“Nothing good enough to steal, if that is the thought dancing in your idiot skull. Dump him over.”

The first boatman wiped his brow and leaned back as he considered the body. “He still has his gold necklace.”

“Take it if you will. I will say nothing. But you’ll have to melt it down to rid its affiliation to the corpse, and that will cost just as much as the necklace itself; the goldsmiths are worse cheats than the Doms.”

“His skin isn’t burnt,” the first boatman continued, as if his companion had said nothing. “Did you see how the rope was tied to him?” He spoke the truth in a calm and unhurried manner. The body bore none of the talismans of cremation, of funeral rites. Every other charred and singed body in the river had endured an end that the two boatmen knew as well as the final scenes of a familiar story, but this body was like a tale with no ending at all.

“Bhaiya,” the first boatman said from his perch on Raman’s boat. “Think. How did this man die?”

“Stop being foolish. He is dead.”

His companion refused to answer. A sigh bloomed from his lips in a white wisp that disappeared into the fog. The first boatman grabbed the oars, took his position position in Raman’s boat, and directed the bow toward Kashi.

“Don’t be blind to what is placed before you,” he said to his friend. He pumped his arms and glided back to the holy city. 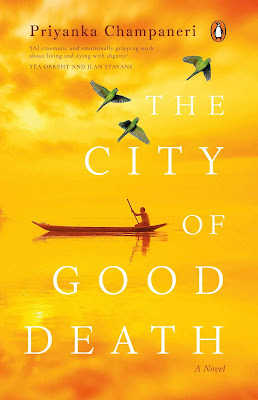 Excerpted with permission from The City of Good Death, Priyanka Champaneri, Penguin Viking.