‘The Mappila Verses’: Where do we go if our names are not in the list?

‘Where do coconut trees go when their roots are declared illegal?’

Following the Palestinian national poet Mahmoud Darwish’s Write me down, I am an Arab, Ajmal Khan wrote “Write me down, I am an Indian” in the wake of the CAA-NRC protests. It was translated into Hindi by lyricist Varun Grover, and into many other regional languages. The Mappila Verses is Khan’s new collection of poems.

Portrait of a Bastard

and the arm muscles anaemic

but lungi, from the Malabar Coast.

Texture of your skin is the mixture of Pulaya and Cheruman

sweat with a scent beyond Arabian sea from Dubai, Abu Dhabi or Saudi Arabia.

How do you speak English this well?
You guys rebelled against them
and boycotted even their language.

How did you get this resilient yet deep eyes

and rage? somewhat remotely similar to Palestinians and Kashmiris

You were never occupied.

They murmur, you are a bastard

in the confluence between the Arabian Coast

and the Malabar before Portuguese and Dutch mastered maritime.

Do bastards have documents?

Of the unholy nights

Where do we go?

Where should we go after the last frontiers?

Where should the birds fly after the last sky?

Where should the plants sleep after the last breath of air?

After the Isha Namaz

Chanting prayers sitting in her Musalla

Keeping her copy of Quran aside with the Thasbeeh, she asks

Where do we go if our names are not in the list?

Where do coconut trees go when their roots are declared illegal?

How does Hibiscus flower if you ask them go back where they come from?

Can you ask Tapioca to go back to Brazil?

Do you ask tea and coffee to go back where they come from?

Where do Great Pied Hornbills go when you tell monsoons are illegal to them?

Where do Mackerels and Sardines go when you inform them, they are illegal in the water?

Do Malabar elephant have identity card to enter Maasai Mara?

Where do Lion-tailed macaques go if they are asked to vacate the Silent Valley?

Can Mundakan and Puncha paddy be cultivated in Saudi Arabia?

Which water Giant Danio’s swim if rivers are made illegal to them?

Is there a list of snakes that are allowed only on the Western Ghats?

On which seas Hassinar fish if you ask him documents to enter the Arabian sea?

Where do we go?
The sword breaks my silence, she asks again

Where?
I reminded her

“For your father, Adam, was created with dirt from the surface of the earth.

You also will be returned to the earth”

We came from soil

We go to soil, until then

The first step in liquidating a people is to erase its memory. Destroy its books, its culture, its history. Then have somebody write new books, manufacture a new culture, invent a new history. Before long that nation will begin to forget what it is and what it was... The struggle of man against power is the struggle of memory against forgetting.

Even before Baba Sahib was born

My ancestors searched for caste annihilation – they became Mappila.

Malik Dinar came to my coast with light

Two lights merged between the Mecca and Ponnani.

Before anyone know anything about songs of resistance on my coast.

– the light houses of self-respect and freedom for my land.

When my ancestors fought against the sons of the empire

On which the sun never set

How do you remove the wounds?

This land is built with the blood of my ancestors

The water we drink – their sweat

Their blood on my nerve

You – stand stable on their dead bodies.

I have become an orphan in my own home

I stand alone at the Ghat of this country

With all the documents and history

For my citizenship approval.

On the way back

Staring at stars, the cosmos and beyond

We went to colleges and universities like curious children following constellations.

Some of us – the only one of our kind

The rest had something similar – their surnames, parents’ jobs

Or the names of the cities they hailed

The kind of dress they wore, the way they spoke English

The brands of cigarettes they smoked and the scent of their sweat.

Those survived were picked up and

The remaining – untouchables in the job market.

On the way back to the village

The road is long with the heavy burden of degree certificates. 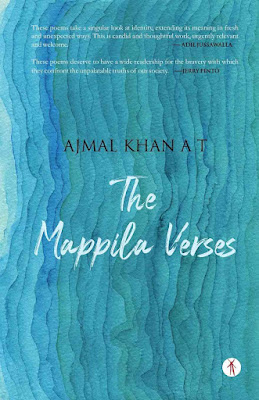 Excerpted with permission from The Mappila Verses, Ajmal Khan AT, Hawakal Publishers.