From Bengaluru to the airport for Rs 10: Why new train service is a game changer

Five trains are now plying between the city and the airport, offering a new path for thousands of passengers and workers.

On Monday evening, Rahul Bhakta, a 27-year-old resident of Bengaluru, frantically checked cab fares to Bengaluru International Airport, located 35 km from the city centre. The aircraft maintenance engineer had a flight to Chennai at 8.30 pm but scrolling through his phone, his face fell as he saw that the cab fare was almost half the cost of his flight ticket.

“It looked like it was going to rain and that would mean a price surge in getting a cab,” Rahul said. He considered taking the bus to the airport but it still set him back by Rs 270. “There was also the evening rush-hour traffic,” says Rahul.

Until Monday, a bus or a cab were Rahul’s only options of public transport to the airport from his home in Kalyan Nagar. But a newly-launched service is now changing that and adding a third option to the mix  — a suburban train from the city to the airport at just Rs 10.

“The timings matched my flight. The station was 15 minutes from my home so I went there and asked at the counter. They said that the train to the airport has started,” said Rahul, holding up his ticket.

Five more trains will operate in the other direction from the airport to the city, with the earliest train at 6:23 am and the last train at 10:38 pm.

The five trains plying between the city and the airport could make a world of difference for the 25,000 people who work at the airport as well as flight travellers and those who accompany the passengers to the airport. 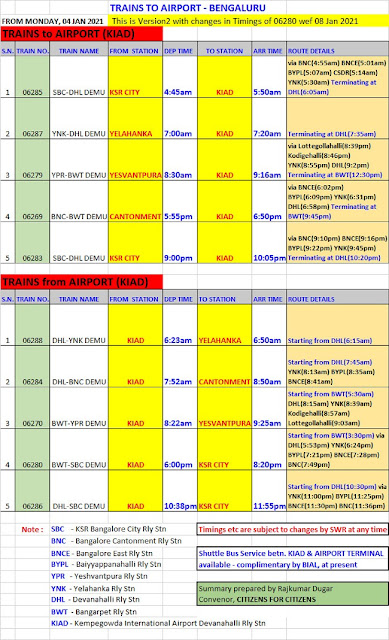 “Till yesterday, there was no option to go to the airport without spending at least Rs 250. The train service is also a cheaper and safer way to commute to the airport since you are not exposed to the pollution of road traffic. These trains can take around 700 people considering the [physical] distancing rules. So the service can now be used by around 3500 people every day. The railways should aim to increase this number,” Rajkumar Dugar, convenor of  Citizens for Citizens (C4C), and one of the activists who advocated for the airport halt station, said.

Rahul boarded the train at 6 pm and was the sole passenger to disembark at the airport about an hour and seventeen minutes later. Though the train provides an affordable and traffic-free path to Bengaluru’s airport, and has been a long-standing demand from activists, there is still little awareness among prospective passengers.

And while Rahul was familiar with the service, he still nervously glanced at his phone every few minutes to follow the train’s path. Channasandra station: 6:24 pm. Bettahalasur station: 6:55 pm.

“It is a new route and there was confusion among travellers. I kept checking the progress of the train on my phone because after all, I had boarded after seeing a Facebook post. I was still unsure that the train would take me to the airport,” said Rahul.

To his relief, the train reached the newly-built airport station at 7:12 pm after leaving Cantonment Railway Station at 5:55 pm. The halt station is located near the boundary of the airport and a free shuttle bus awaited Rahul.

Rahul reached the airport at 7.30 pm, an hour before his flight. “I spent Rs 60 for the auto and the train ride and I didn’t get late for the flight. Even though the train was delayed by 20 minutes, the ride was definitely more comfortable than being stuck in Bengaluru traffic,” a beaming Rahul said.

However, all was not well during the launch of the service on Monday. The first train left KSR Station at 4.45 am amid fanfare and with high-profile passengers on-board. But commuters complained that the train from Yeshwantpur to the airport at 8:30 am was delayed by an hour. The train travelling from the airport to Cantonment Station was similarly delayed and only arrived at 9:30 pm, an hour late.

Mohan, who manages an electrical shop in Chikkaballapura, is a regular commuter on the route from Yeshwantpur which extends beyond the airport. He said that there were no delays in the route in the weeks before the airport service was launched. “Today was the first time in a while there was a long delay, both while going towards the airport and later while coming back to the city,” Mohan says.

A railway official played down concerns over the delays stating that it will review the trains in the line and decongest it. “We will be addressing the issues that came up on the first day,” a railway official says.

The 24-km of rail line between Yehalanka and Devanahalli is a single track, which means that trains can only go once every 30 minutes in either direction. The airport halt station lies in between these two stations. “Ideally, the railways should take up doubling work on this line,” Mohan says.

Rajkumar Dugar however explains that since a double line may take years to build, upgrading the railway station in Doddajala to a crossing station at the cost of Rs 10 crore will ease the congestion. The Doddajala station, which is over 100 years old, is the penultimate station before the airport halt station while travelling from the city.

Despite the challenges, commuters like Rahul say that the airport train is the only sensible mode of transportation to the airport.

“When a cab ride can cost as much as a plane ticket, having a cheap train service to the airport is essential. I will be encouraging people to use this service. It can be improved but if you plan in advance, this is a great alternative to go to the airport,” Rahul said, adding, “The railways should ensure that there are minimal delays.”

Posted by Arjunpuri in Qatar at 09:30