In the 40 attacks where journalists died, 21 were confirmed to be related to their journalistic work.

Free press – the fourth pillar of democracy – sounds powerful. However, in the last few years, it has become more and more dangerous to be a journalist in India. A report called ‘Getting Away with Murder’ by journalists Geeta Seshu and Urvashi Sarkar on attacks on journalists in the last five years has some grim findings. The research was funded by Thakur Foundation, which works in areas including public health, right to information, and civil liberties.

At least 198 serious attacks were recorded on reporters between 2014 to 2019, and of these, 36 happened in 2019 alone. Six of these are fairly recent, having happened during the protests over the Citizenship Amendment Act. 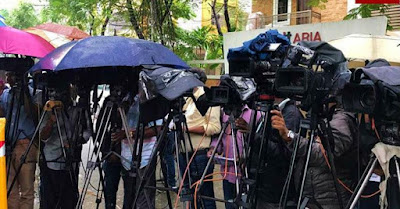 In 40 of these, journalists were killed – 21 of them were confirmed to be related to their journalistic work. The researchers chose 63 cases in all to follow up on – where scribes were found to have been attacked for their investigative work – and found a near-zero conviction rate. “Of the 63 cases studied, FIRs were lodged in only 25 cases. In 18 of these, the case hasn’t progressed beyond registering of the FIR. Chargesheets were filed in three cases but the process stalled thereafter. In only four cases, a trial has commenced.”

Self-censorship seems to have become more the norm than exception, the report says. It found that the media persons taking on corruption, excesses and powerful persons such as mining and sand mafias, were most vulnerable. For instance, The Wire’s story on the growth of the business firm run by Jay Shah, Home Minister Amit Shah’s son, was met with multi-crore legal notices, and defamation cases.

“But the ultimate censorship is the killings, that have claimed as victims both prominent senior journalists and editors in state capitals, to locally influential journalists as well as the foot-soldiers –stringers and freelancers- in small districts and towns across India,” the report says. Majority of the journalists who were found to have been killed or attacked were self-published, wrote on social media, or published in regional media.

The report also highlights attacks on women journalists – they were found to be the targets of “relentless online harassment” as well, apart from “brutal” offline targeting in the field. Examples: Gauri Lankesh’s murder in a residential area in Bengaluru in 2017, a petrol bomb attack carried out at the home of Shillong Times editor Patrician Mukhim, journalists Sandhya Ravishankar and M Suchitra attacked in Chennai while covering illegal mining, to name a few.

Journalists were found to be particularly vulnerable in conflict zones, such as Kashmir, and Bastar in Chhattisgarh – not just from being caught in the crossfire, but also from law enforcement officials. In 2017, at least 14 journalists were arrested by Chhattisgarh government on various charges. And this report highlights the challenges such as information lockdown and intimidation being faced by journalists in Kashmir.

Further, there seems to be no official record or data when it comes to attacks on journalists. The study’s sources were a Rajya Sabha response, National Human Rights Commission (NHRC) data, Press Council of India (PCI), news reports, and so on.

In the first case of Gauri Lankesh, a staunch critic of the right wing and fundamentalist groups, who was shot in 2017, a 9,325-page chargesheet naming 18 accused was filed in November 2018. The trial is yet to begin, over two years later. The case of Shujaat Bukhari, who was killed along with his two bodyguards, in 2018, remains unsolved. While Kashmir police said that the Lashkar-e-Tayyaba was behind it, the outfit denied this through statements published in papers. As of June 2019, one suspect was killed in a shootout. The proceedings are at a standstill following the lockdown in Kashmir after abrogation of Article 370.

The report also mentions the death of Ramchandra Chhatrapati, who worked with Poora Sach. It took 17 years to obtain a conviction against Gurmeet Ram Rahim, the self-styled godman who is already serving a 20-year life term in relation to two rape cases. Chhatrapati had reported on the sexual exploitation of young women in Gurmeet’s ashram. He was shot on October 24, 2002, and succumbed to his injuries.

These instances show how slowly such cases move forward, and especially when the media coverage dies down. In fact, out of the 21 deaths that the report found between 2014-19, only in the case of Tarun Acharya did a conviction come. Further, despite testimonies by colleagues and family members, the reasons behind the killings were often attributed to things like property dispute, past enmities, family or marital disputes.

For instance, in the case of Rajdeo Ranjan, the bureau chief of Hindustan, killed in 2016 allegedly by supporters of former RJD MP Mohammad Shahabuddin, it was after much persistence of his wife Asha that the CBI took up the case. Initially, the trial was proceeding at a good pace, and 10 witnesses deposed before the court too. However, in October this year, she found that the CBI counsel was no longer attending court, and missing all the dates as it had been decided that the CBI case hearings were to be dealt with by the special crime branch of the states. Three years since her husband’s death, she said then that she felt like she was back to where she had started.

Some journalists also expressed reluctance or unwillingness to report attacks on them to the police. “Journalists have had police raid their homes, smash their cameras and even fire tear-gas shells into their homes. In July 2018, Fahad Shah, editor of The Kashmirwalla, took to Twitter to say that a teargas shell was fired into his home, two weeks after his parents’ car was broken. Shah did not file a formal complaint. “Whom do I complain to? I know who did it but what’s the point. Later, I got an ‘informal’ message via someone that it should not have been done and that the action was regretted,” he said to a researcher […],” the study says.

In many cases where journalists did opt for legal proceedings, they were not supported by their employers.

Researchers make several recommendations such as reaching out to journalists, their families and colleagues without delay, providing medical and financial assistance, and psychological assistance to families of the deceased as well as to journalists who have faced attack.

It is also recommended for the government to take a proactive stand when journalists are attacked, appointing a high level official to look into the investigation and ensure that there is no pressure on law enforcement.

Apart from quasi-legal bodies like PCI (Press Council of India) and NHRC (National Human Rights Commission) taking suo-motu cognisance of such cases, they should also make their inquiries and findings public, and monitor investigations. Employers are suggested to support their journalists.

Networks, human rights activists, lawyers, and medical practitioners can also contribute by providing timely assistance. The report also recommends to build up a network of journalists’ organisations and groups to set up helplines, provide safety, and monitor cases and justice delivery till their conclusion.

The imprint of Periyar is visible in the evolution and the trajectory of the Dravidian Cinema, particularly during its most significant peri...