Artist KR Santhana Krishnan — better known as “Doors” Santhanam — will tell you that his ancestral house in Edappadi, a town in Salem district of Tamil Nadu, had 82 doors. But that was not why the 43-year-old artist picked up his brush and began illustrating a doorway for the very first time in the late 90s. When Santhanam began first, about 20 years ago, it was by chance; an innovative idea he thought of while pursuing his Bachelors in Fine Arts at Kumbakonam. Now, two decades later, he is still on the same relentless pursuit of painting doors, which may have crossed 1,000 in number by now. “Not to boast, but I don’t have any of the doors I have painted with me right now. They have all been bought by patrons,” he tells TNM. 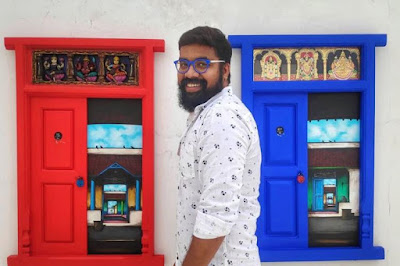 Up until 2004, Santhanam was painting doors, trying to capture all of its facets but a specific incident from that year changed his outlook. “I got a call from the gallery where some of my paintings were displayed. Someone wanted to meet me,” he recounts. 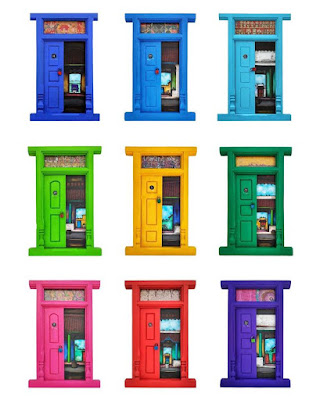 From this encounter, Santhanama gained an important perspective, he shares. “The person had come from the United States along with his children and had chanced upon my painting that was exhibited in the Vinyasa Gallery at the Music Academy. He was stunned to see that it was his ancestral house from Kumbakonam and was curious to know about the painter,” Santhanam explains. 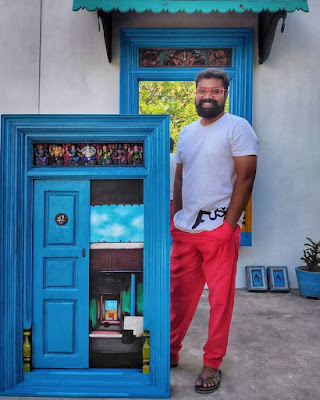 “But even while I was standing there, he began pouring his memories to his children. It was a trip down memory lane and that was when it struck me that my paintings were not just works of art but they contained stories. It brought out the nostalgia in the viewer,” he adds. 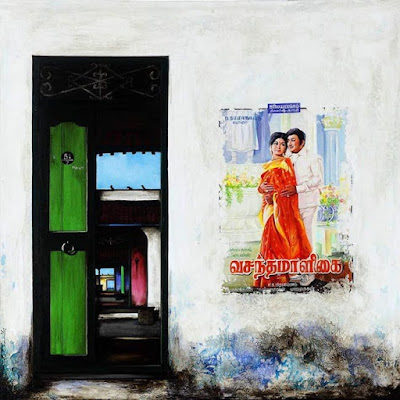 But from being just figurative models that captured architectural details, Santhanam’s doors went on to take a deeper meaning.

Of the many comments that Santhanam has received from his patrons —  most of who are living outside the country — the most endearing to him are when he was told that they are conversation starters. Buyers attach a deep sense of nostalgia with Santhanam’s doors that end up becoming not just a piece of meaningful art but personal art for its viewer.

“I have painted doors from across the country. “In those days, people had the habit of keeping doors open, unlike how it is in the cities. You can see how the house breathed in air through these doors and the open mitham (a courtyard of sorts) and how it exhaled through the backyard that usually had the garden. It is a beautiful concept,” he shares. 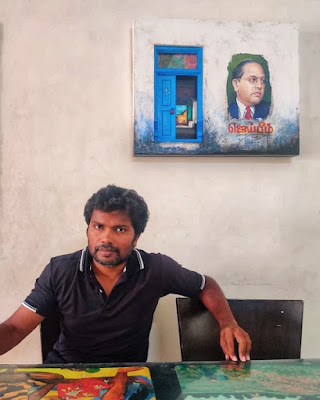 “Ideally, the format of the doors are the same. I add some details to it with door numbers, geographical location markers like corporation markers, etc. But I make sure there is always a good pop of colour. You can find it in the way I dress. I love colours and would always like to keep everything I am associated with very colourful,” he adds.

From starting to illustrate simple doors in watercolours, Santhanam has constantly been reinventing his style within the constraints of the door. In one minimalistic bright-yellow door peeks a flower-patterned zari set against purple in a typical Kancheepuram weave, with a pop of blue in the heavy-looking lock that hangs below.  Then there is a leaf-green door set against a deep-red wall with fading traces of Rajput painting on its transom. One can also find film posters on the walls. From canvas and mixed media in wood three-dimension to Thanjavur style relief painting, there are life-size doors and the world they open up are limitless. 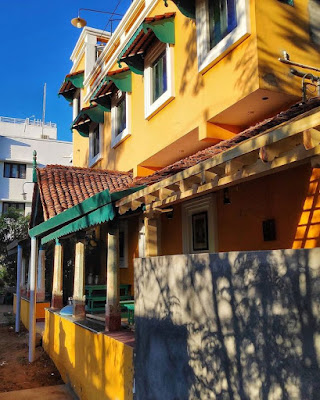 Santhanam’s doors adorn several popular personalities’ homes. From actor-politician Kamal Haasan, director Pa Ranjith to politicians like Kanimozhi and former Chief Minister J Jayalalithaa. Kamal Haasan, in fact, once said, who once told him, “Everyone needs a door, don’t they?”.

When asked if his door adorns the house of another popular figure from Edappadi, Santhanam adds with a chuckle, “No, but I know him (Chief Minister Edappadi K Palaniswami) quite well. I have ridden with him on his Bullet when I was a young boy.

Back then, he used to sport a moustache just like Singam Suriya.”

The artist, who recently moved to Kumbakonam, has built a stunning homestay with the doors as their theme, which also doubles as an artist residency. “I have been very dedicated to this idea,” he tells TNM.

Twenty years on, Santhanam is never tired of painting doors. “People have made fun of me, asking if I ever get bored with doors. I’ve never been bored,” he says.

He recounts the moment when Telangana-based artist Thota Vaikuntam came up to him during one of his shows and gave him a word of advice. “He said: ‘You are a beautiful artist. Everyone would want to confuse you. Take me for example. They keep asking why I keep drawing a woman’s face. But keep doing what you’re doing, unless you yourself are bored of it’.”

Santhanam remembers those words and adds, “I’ve never grown tired of it.”