Tempura - How to enjoy one of Japan's most popular dishes

Tempura stands as one of the top three classic Japanese dishes along with sushi and soba noodles. Discover the various types of tempura, how to eat it and find out more about great places to enjoy tempura!

Basic Information on Tempura
A staple dish among the Japanese cuisine is tempura. A simple dish, tempura is made from various ingredients which are coated in a batter of flour and water then fried. The history of tempura is said to go back to the fifteenth century when fried food was introduced in Japan from Portugal, along with guns and Christianity.

At the time of its introduction to Japan, cooking oil was very expensive and tempura was considered to be a high-end dish. However, during the Edo period, the production of cooking oil spread and tempura became a favored dish among the commoners as well. Currently, along with sushi and soba noodles, tempura is a local dish that is known to be one of the "top three dishes of Edo (Tokyo)". However, depending on the region in Japan, the ingredients used, along with how it is eaten, varies. Recipes using tempura also have been growing among home-cooks and shops in recent years. Tempura is increasingly becoming known as a household dish that can be arranged and enjoyed in various ways. 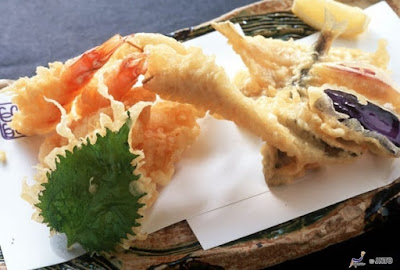 Tempura Recipe
Making tempura is not very difficult, and you can use a variety of ingredients, so don’t worry if you can’t find tempura flour.

How to Make Tempura Batter
It depends on how many people you are serving, or how many portions you want to make, but this is a good standard recipe to follow, with substitutions included if you can’t find all of the ingredients at your supermarket.

If you want a more flavorful batter, you can add a pinch of salt, pepper, chili flakes, or even green tea powder to the mix.
In a large bowl, mix the above ingredients together and lightly whip them with a fork by hand. Try to leave some lumps in the mix. You should avoid using an electric mixer, this will overblend the batter and make it less crispy when fried.

Heat the oil to 180 degrees Celsius. You can tell that you have gotten the correct temperature of the oil when you drop a bit of the batter into the pan. If the batter sinks and floats quickly, the oil has reached its optimal temperature for frying.

The frying time for each piece is approximately 50 seconds, but this depends on the size of what you are making.

Dip your choice of prepared vegetables, seafood, or other foods in the batter and fry them in the oil until they have a light, golden color to them. Put them on a drying rack or on some paper towels to absorb the extra oil, then serve them.

Types of Tempura
Shrimp Tempura
Frequently referred to as “ebiten" in Japanese, shrimp is a classic ingredient used to make tempura.

The plumpness of the shrimp combined with the crispy coating make ebiten one of the most popular types of tempura available. It can be eaten on its own, but it is also good when combined with other dishes such as udon noodles, soba noodles, sushi, onigiri rice balls and more. Perhaps shrimp tempura has the most recipes and variations out of all tempura ingredients.

Vegetable Tempura
Vegetables are also must-have ingredients. The classics are as follows.

Eggplant: it is very juicy and scrumptious.
Lotus root: not only is it a tasty vegetable, but the texture when you bite in is also enjoyable.
Sweet potato: there are many fans of the light sweetness of this potato.
Pumpkin: the sweetness of the vegetable can be enjoyed here too.
Carrot: most of the time, the carrots are thinly sliced and combined with the batter when fried.
Okra: not too common, but can be found on occasion.
Perilla (Shiso) leaf: enjoy the scent of the herb along with the flavor.
Green bean: a perennial favorite.

Fish Tempura
Whitefish are usually used for fish tempura, but the eel tempura is the most popular fish-type tempura. Like the chicken, removing the bones and preparing the eel is quite difficult, so many tend to eat it at restaurants rather than making it at home.

Mushroom Tempura
Another popular seasonal tempura ingredient are mushrooms, such as shiitake and maitake. Many people enjoy savoring mushroom tempura with just salt rather than dipping it in tempura sauce. This is a dish where you can enjoy the crispy coat of the tempura along with the fresh texture of the mushroom.

Kakiage
Despite the different name, kakiage is a type of tempura. Vegetables such as those listed above and seafood are finely sliced and fried together in the batter. Kakiage is not eaten by itself but frequently eaten as a topping on udon or soba noodles and on top of rice.

Unique Tempura
Ice Cream Tempura
Since tempura is a simple dish where only the batter is needed before frying, there are plenty of unique tempura made using various ingredients. One very unique tempura that even surprises the Japanese is ‘ice cream tempura’.

The hot and crispy outside with the cold ice cream on the inside makes this tempura a popular sweet treat. There are shops that serve it as a dessert, but it is a fun tempura that you may want to try making at home.

Mozuku Seaweed Tempura
In Okinawa, a different kind of classic regional dish called mozuku seaweed tempura exists. Mozuku is a type of seaweed that is typically eaten in miso soup or simply dipped in soy sauce with vinegar.

Japanese Maple Tempura
Another surprising tempura is the momiji (Japanese maple) tempura! This is a specialty of Minoo in Osaka and during the autumn, it becomes very popular among tourists. True to its name, it is a Japanese maple leaf that is batter and fried in tempura style. The leaf itself is a product that has been carefully grown specially to be eaten and is pickled in salt before being made into tempura. It would be a nice treat to enjoy a little bit of autumn by trying ‘Japanese maple tempura’ out in Minoo.

Tempura Sushi and Onigiri Rice Balls
From here, you will find variations on dishes made using tempura.

Lately, tempura has become a popular ingredient used in sushi in many places around the world. A classic menu you can find in a sushi-go-round is ‘shrimp tempura’ sushi. It can be found as regular sushi or sometimes inside a roll.

Shrimp tempura is not only found in sushi, but also used often as an ingredient for onigiri rice balls. Commonly referred to as ‘tenmusu’, it is known as a specialty of Nagoya but can be found nationwide, including at convenience stores.

Ten-don is a typical Japanese dish where pieces of tempura sit atop a bed of rice and are drizzled with sauce. One of the best food matches with tempura is rice.

A simple dish with a dizzying array of ingredients to choose from, tempura is a food that can be enjoyed in countless ways. Even now there are new and unique tempura recipes being created - there are limitless possibilities with this dish!

How To Eat Tempura
The standard way of eating tempura is with a dipping sauce called ‘tentsuyu’. 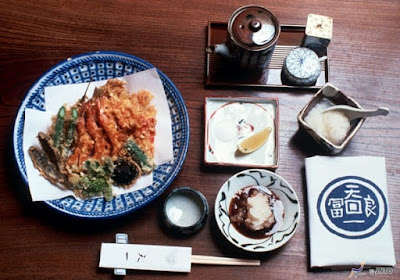 Tentsuyu is made after boiling broth, soy sauce, and mirin together. Inside the tentsuyu, daikon oroshi (daikon radish ground to a liquidy paste) or ground ginger is added for flavor.

Another popular way of eating tempura with sauce is the ten-don rice bowl we mentioned earlier.

Another common way of eating tempura is by putting it on top of udon or soba noodles. Shrimp tempura and the kakiage are the typical tempura toppings for noodles. Sometimes they are served on the side though, if you have ordered a set meal.

Tempura soba or tempura udon are usually available at soba or udon noodle shops, so for those who are curious by all means please give these dishes a try.
Please read "What You Need To Know About Eating Tempura" for more information on how to eat tempura.

Prices For Tempura
Tempura is usually priced very reasonably. At soba or udon noodle shops, you can select from one piece of tempura, which ranges from about 100-200 yen per piece.

The ten-don rice bowl with tempura on top typically costs about 600-1000 yen. Even at a high-end shop, you will probably find a bowl for an average of 2000 yen.

Tempura Restaurants
Tempura is served in high-end restaurants and banquets at times, but it is also a dish that can be enjoyed casually at home. Therefore tempura can be found in a range of dining places such as chain restaurants, izakaya bars, luxurious Japanese restaurants and more.

Tempura meal sets and ten-don are commonly found on menus, but trying professionally made tempura in specialty shops is highly recommended. Below is a selection of high-end to casual restaurants you can enjoy according to your budget.

Ginza Hageten
Aside from Ginza and Shinjuku, this is a tempura specialty shop that has branches mainly in the Kanto area. You will be able to enjoy a course tempura meal in a relaxing restaurant.
Address (Ginza main branch): Tokyo, Chuo ward, Ginza 3-4-6
Phone number (Ginza main branch): 03-3561-1668
Website: https://www.hageten.com/english/

Despite its simplicity, tempura is a dish with many possibilities. It is definitely worth it to savor some tasty tempura at a specialty shop the next time you are in Japan!