On not being there

The balloon seemed to come not so much from another place, but another time. Out of the past, or maybe the future. From a different summer anyway, one with birthday and graduation parties, a summer we’d seen before or one yet to come.

It fell slowly, floating toward the field during the bottom of the eighth inning of Opening Night of the 2020 Major League Baseball season, a game under the lights at Dodger Stadium, where the Dodgers were hosting the Giants. A square, multicolored foil balloon, the kind everyone professes to hate because they get caught in power lines and take a million years to decompose, but which remain a staple of celebratory gatherings. Celebrate! was, in fact, printed across the front.

In this pandemic summer of isolation and distance, where there wasn’t much to celebrate, the balloon seemed lost. On the ESPN broadcast, play-by-play announcer Karl Ravech sounded incredulous. “How does that happen,” he asked, “with nobody in the stands to blow up balloons?”

The balloon touched the infield dirt between first base and second, just a quick kiss, then rose again, drifting low over the ground. None of Ravech’s broadcast partners had an answer to his question. The telecast was silent for a long moment. The players, the umpires, all of us at home watched the balloon. Finally, Ravech asked again into the silence. “Where did that come from?” He sounded shaken, awed. A masked ball boy ran out and grabbed a foil corner, pulling it off the field. The Dodgers’ quick-thinking organist began playing Nena’s eighties hit 99 Red Balloons, the plaintive chords echoing through the empty stands.

It was an uncanny start to what promises to be an uncanny season. Sixty games played over sixty-six days: an uncertain sprint instead of baseball’s usual steady marathon. The league’s divisions were reshuffled to limit the amount of travel, but teams were still supposed to play in all thirty ballparks, to give the season some sense of normalcy and allow players time with their families. But the plan’s cracks began showing immediately. Canada decided it was a bad idea to allow all those visiting American players, coaches, and support staff into the country and denied the Blue Jays access to their home ballpark. And within just a few days of Opening Night the sport had its first coronavirus outbreak. Almost half the Miami Marlins roster tested positive, putting their season on hold and underscoring obvious questions about the safety of the entire endeavor. 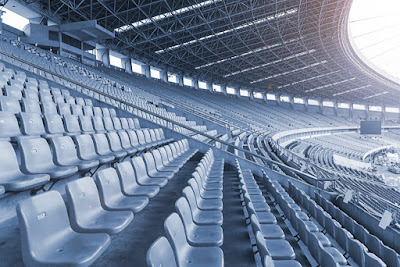 There to watch all of this unfold, at least in person, was … no one. Twenty-nine stadiums are in use, but fans aren’t allowed into the stands. Instead there are oceans of empty seats and, in some ballparks, cardboard cutouts of fans, rows of two-dimensional bodies and faces frozen in some past moment: smiling, cheering, reaching for what, in normal times, is the greatest of souvenirs—a home run ball, that magic object crossing from one world to another, from the dream of the game to the waking life of the stands.

My family is serious about baseball, but we only go to a handful of games each season. Between the cost of tickets, parking, lunch, a foam finger or whatever, it’s a very expensive afternoon. Instead, for the price of a couple seats, we subscribe to baseball’s streaming service, which allows us to watch almost every game on TV. It’s not the same as being there though, and we cherish those rare afternoons in the stands, slathered in sunscreen, cheering and groaning and singing “Take Me Out to the Ballgame” with thirty thousand strangers.

When we watch the games on TV during a normal season, the fans are more than a backdrop to the action on the field; they’re our other half, a proxy for all of us who aren’t there. We cheer and they cheer and somehow we’re together, sharing the experience. So what does it mean now to watch a game with piped-in crowd noise and all those empty seats? The connection has been broken. Our other half has vanished.
No one’s there, except the cutouts.

Those few times over the last couple of seasons when my wife and son and I have gone to games, we’ve driven down to Anaheim to see the Angels. Not because the Angels are a good team—they aren’t—but because they have the best player in the game, Mike Trout, and the baseball equivalent of a unicorn, Shohei Ohtani, an elite pitcher who’s also an elite hitter. Ohtani has quickly become one of the sport’s most popular players, with a particularly devoted and fervent following among Japanese American fans. The cheering that sometimes erupts when he steps onto the field is not unlike the clamor that greets the best-looking member of a boy band. The Angels once even asked a group of exchange students not to scream so loudly when Ohtani stepped to the plate, worried the noise would distract him.

Last September, as the Angels’ season staggered to another unspectacular close, we sat far down the first base line to get one last in-person glimpse of Trout and Ohtani. A few rows in front of us a group of fans settled in, very ready to cheer for Shohei. They wore his jersey, they held signs and a long banner and a Japanese flag. Their devotion gave focus to the afternoon. Suddenly a game that didn’t matter much for either team felt like an event. But when the starting lineups were announced, Ohtani was on the bench. He’d been given the day off. The fans in front of us deflated; our whole section deflated. If their enthusiasm was contagious, so was their disappointment.

Every couple of innings, when it seemed like a good time for a pinch hitter, our section perked up, mentally crossing our fingers, listening for the PA announcer to introduce Ohtani. We had no luck, though, through four innings, then five. The Ohtani superfans at the front of our section sunk a little deeper into their seats. The rest of us sunk with them. But in the bottom of the sixth, with the Angels trailing, Ohtani grabbed a bat and helmet from the dugout and walked to the plate. Most fans in the stadium rose to their feet, excited to see him, but the people in front of us went absolutely bananas. They leapt from their seats. They cheered and shook their banner and waved the flag. Ohtani walked, which was, okay, not the most spectacular possible outcome, but we didn’t care. He was here! We were here! Everyone in our section was screaming, not so much for Ohtani, but for our neighbors in Section 344. We were cheering them cheering him. For one ecstatic moment we were all connected.

The cutouts of fans in the stands are real fans who’ve sent their likenesses to the game in their stead. The Dodgers’ photo specifications are similar to those for most teams filling their stands with fan cutouts. To curtail the more mischievous, entrepreneurial, or contrarian among us, there are a lot of prohibitions. No “obscene, lewd, or explicit” content. No hashtags. No “endorsements of political candidates.” No cutouts wearing opposing teams’ merchandise. Home team gear is encouraged, though, as are photos of pets. During a game the other night, the broadcast cut to a shot of six humans, two dogs, and a cat all sitting in a row, like an outtake from Doolittle.

A close friend is a die-hard Dodgers fan. He has remained faithful through decades of triumphs (Fernando Valenzuela, Kirk Gibson, Clayton Kershaw), water-treading futility (most of the nineties), and gutting near misses (the last two seasons, where the team lost back-to-back World Series). For his birthday last month, we bought him a cutout. Some of the cost goes to the Dodgers Foundation, but it still seemed an expensive, silly gesture. I don’t know why it felt like a necessary gift. Part of it was an attempt to embrace one of the more bizarre aspects of a bizarre season, and the hope that we’d see his static doppelganger on TV. But there was some magical thinking involved, as well. If his image was out in the stands, then wasn’t some part of him there, too?

It has also become a way to memorialize lost loved ones. Sal Valencia’s wife and daughter bought a cutout of him to sit in the Oakland Coliseum. He died in January 2019. His daughter told CNN that they “wanted to have something of him out there just so we could see it.” Van and Peggy Freed bought a cutout of Van’s late mother, a Tampa Bay Rays fan who died in 2017. She was ninety-four. The New York Mets honored New York Post photographer Anthony Causi with a cutout placed in the Citi Field photo pool. He died of COVID-19 in April. He was forty-eight.

This is the summer of not being there, of missed births and birthdays, weddings and memorial services. Of attempting to FaceTime with grandparents in memory care facilities; of driving in a slow procession, honking the horn as a gowned graduate stands in her driveway; of grieving daughters and sons posting pictures of their father’s flower-draped casket in an empty funeral home.

I’m very fortunate: my parents, both seventy-eight, are healthy and active. But they live on the other side of the country. I haven’t seen them—my son hasn’t seen them—since last June. The other day I realized that this is the longest span of time I haven’t been in the same room with them, where we haven’t touched. We talk on the phone, we see each other on Zoom, my son plays chess with my mom on FaceTime, but it’s impossible to forget the distance between us.

The last time we were together was at an Angels game. We got sunburned and spent too much money and cheered for people we didn’t know.

Rooting for anything is magical thinking. Whether watching on TV or out in a ballpark we cheer because we believe it matters, that if we care enough then somehow that emotion and energy will transfer to the players. But there’s more to it than that.

I don’t like the wave, or the beach balls that bounce around the stands. I’m not a fan of fan behavior that draws attention from the game. But now I think I understand why people cheer when a beach ball, or maybe even a balloon, makes its way down onto the field. It’s a way of saying, We’re here, too.

This season, the empty ballparks seem like liminal spaces. That line between the dream of the game and the waking world of the fans has blurred. A balloon falls from the night sky and onto the field like a reminder, or a hope for the future. That reminder, that hope, creates its own connection between all of us at home and the proxies, projections, and memories that fill the stands: the cardboard cutout of my friend or an Ohtani superfan or someone’s lost loved one cheering, laughing, watching the game.