When it comes to Sridevi one can safely say there were two distinctive personas to the late screen legend. The first is the individual who started acting at the tender age of four, never had any semblance of a regular childhood and grew to be a professional actor who got to lead a ‘regular’ life very late. The other is the iconic screen diva who dominated cinemas across three languages, changed the rules of the game and for a brief period became a rare example of a woman that not only said no when offered sub-par material but manage to get scripts changed to match her stature in two male-dominated film industries, Telugu and Hindi.

These two images are polar opposites of each other and the twain shan't ever meet. The real Sridevi is straddled somewhere in-between and unfortunately, any biography trying to trace the life and times of the legendary actress would have to oscillate between the two. For what it’s worth Lalita Iyer’s Queen of Hearts: The Life of Sridevi [Westland, Rs 399] manages to steer clear of maintaining this balance and wonderful as that is, the book ends up being about what Sridevi means to most of her fans than what it meant to be Sridevi. 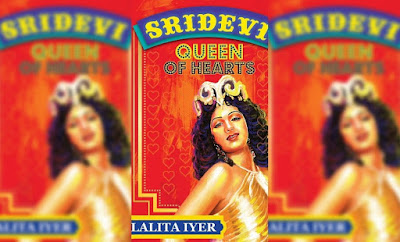 For most people who follow Hindi and Tamil cinema, it would be near impossible to think of a world without Sridevi. The fact that she was a ‘given’ when it came to talking about popular films in India, one believes that there might not be anyone who doesn’t know about Sridevi. But these are people who look at Sridevi from the prism of her films and the characters that she played. Sridevi would perhaps be the only actor who did not evoke a strong enough sense of mystery within the viewer to try to discover the ‘real’ person behind the larger than life image.

Iyer grew up with Sridevi’s performances and somewhere like the countless fans of the actor, milestones in Iyer’s life, too, seem to be juxtaposed with Sridevi’s characters. In that sense, Queen of Hearts is more of the impact Sridevi had on the psyche of her audience. For the current crop of the average Indian, who is under the age of 30, there is a lot to discover about Sridevi in Iyer’s book. Iyer dissects a bunch of Sridevi performances from the usual yardsticks but it might fall short for those who belong to the generation which saw many of these films at the time of their original release.

These two aspects — Sridevi being an indelible part of the history of Indian cinema for nearly five decades and the influence a Sridevi performance wielded on the viewer — play a significant role in how the Lalita Iyer’s book reads. For the average reader, the book may appear disjointed and even haphazard. The so-called Sridevi X factor is a dangerous thing. It can make a fan assume that everyone out there believes in Sridevi the same way they do. Iyer does bring out the socio-political scenario both within the country as well as the industry that helped in creating the aura surrounding Sridevi.

She juxtaposes the early careers of Amitabh Bachchan and Sridevi and how they appeared to follow a similar trajectory but does not seem to be intrigued, at least not beyond a point, to explore how Sridevi managed to reach a position of power in the minds of the average viewer, the kinds who wouldn’t expend any energy reading into the hidden nuances of her performance.

Could this have to do with the fact that one of our greatest and most influential actors was indeed a great mimic? This is what one infers from the way parts of many old Sridevi interviews from film glossies are used in the Queen of Hearts when it comes to her craft. There is definitely more to Sridevi both professionally as well as personally than what met the eye and even though Iyer more than hints at that, the latter more than the former, one wished the book scratched a little more.