The Commons vote on Tuesday will not be delayed, the Brexit Secretary has said, amid growing calls for the PM to go back to Brussels to renegotiate.

Stephen Barclay also said Theresa May could stay in post if, as expected, MPs reject her Brexit deal.

The PM has warned Tory rebels it could lead to a general election, and there was a "very real risk of no Brexit".

Boris Johnson said the PM could stay on but must renegotiate the deal and get rid of the controversial "backstop".

The withdrawal deal negotiated between the UK and EU has been endorsed by EU leaders but must also be backed by Parliament if it is to come into force.

But the government is widely expected to lose next week's crucial vote with Labour, the Liberal Democrats, the DUP, the SNP and dozens of Conservative MPs saying they cannot support the deal.

Brexit Secretary Stephen Barclay said, with two days of debate remaining, the government would continue to make the case for it. Despite speculation it could be called off, he said: "The vote is going ahead and that's because it's a good deal and it's the only deal".

He warned against those advocating negotiations could be reopened, if the deal is rejected: "The risk for those who say simply go back and ask again, the risk is that isn't necessarily a one-way street.

"The French, the Spanish and others will turn round, if we seek to reopen the negotiation, and ask for more." 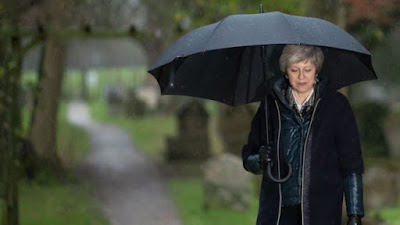 And he insisted that Theresa May could remain prime minister, even if her deal is heavily defeated by MPs: "Yes, the prime minister is fighting for us and will continue in post.

Meanwhile Mr Johnson, who quit the cabinet over Mrs May's Brexit strategy, told BBC One's Andrew Marr Show he did not want a "no-deal" Brexit or another referendum, but it was not right to say there were no other alternatives.

He said the Northern Ireland "backstop" - effectively an insurance policy to prevent a hard border if no free trade deal is struck in time - put the UK in a "diabolical negotiating position". MPs could give Mrs May "a powerful mandate to change that backstop" by voting it down on Tuesday, he said.

"Let's go back to Brussels, get this thing done in a serious way that allows us to take back control," he added.

He dismissed suggestions he had already offered other Tory MPs jobs if they backed a future leadership bid by him as "nonsense" and said the public wanted to see a plan "to get out of this mess" rather than "stuff about leadership elections and personalities".

And the former foreign secretary, a key figure in the 2016 campaign to leave the EU, said: "Don't underestimate the deep sense of personal responsibility I feel for Brexit and what's happened.

"It breaks my heart to think that after all we fought for... that we should confine ourselves to a future in which the EU effectively rules us in many respects and where we have no say in Brussels."

If the deal is rejected, it is unclear what happens next. Mrs May told the Mail on Sunday: "When I say if this deal does not pass we would truly be in uncharted waters, I hope people understand this is what I genuinely believe and fear could happen.

"It would mean grave uncertainty for the nation with a very real risk of no Brexit or leaving the European Union with no deal."

Brexit minister Kwasi Kwarteng told Sophy Ridge on Sky News that while he understood Remainers wanting to "do down" Mrs May's deal he was "very surprised" that Brexiteers "are willing to blow up a deal which actually delivers a very good path out of the EU".

However, in the Telegraph, former Brexit Secretary Dominic Raab said Mrs May's deal would cause "long-term damage" and called on the government to make a final attempt to renegotiate its terms.

And Esther McVey, who quit the cabinet over the deal, echoed Mr Johnson's comments and told Sky Mrs May should "immediately" renegotiate with Brussels, if MPs reject her deal.

Asked if she would consider a leadership bid, she said it was not about "personalities" but about the deal and she would back the PM if she renegotiated the deal.

But she did not rule it out, saying she'd give it "serious consideration" if she were asked to stand.

Meanwhile the cross-party Commons Committee on Exiting the European Union said Mrs May's deal did not give enough clarity or certainty about the future, describing it as a "huge step into the unknown".

The committee described the draft political declaration on the future relationship between the EU and the UK as "neither detailed nor substantive".