‘He was what was called in those days a sports type’: Ram Guha through the eyes of Rukun Advani

‘His aim was to disprove the Hindu idea of reincarnation by circumventing his own afterlife through becoming either Bishan Singh Bedi or Erapalli Prasanna.’

It may be best for me not to begin my recollections of Ram along the standard template which recommends the phrase “The first time I met...” The reason is that our first meeting was inconsequential. Apparently, we met on a college badminton court forty-five years ago, in about July 1974.

Since Ram did not go on from this badminton court to become the father of Deepika Padukone, this first encounter’s location, at least, was not an augury of the direction of Ram’s future fame. I have no idea what Ram was doing near a badminton court in the mid-1970s because his interests lay in a corner of a different field, the cricket pitch. His agenda even then was anti-Hindutva, though it took a peculiar shape because it had become mixed up with his interest in cricket.

His aim in those days was to disprove the Hindu idea of reincarnation by circumventing his own afterlife through becoming either Bishan Singh Bedi or Erapalli Prasanna in this life. Failing either of those two options, he seemed to have resigned himself to a third, which was to become Gundappa Vishwanath. Since I was far from passionate about cricket, for the remainder of our college years Ram and I lived proximate lives without ever coming close.

I knew roughly who he was, and I also knew precisely what “type” he was – he was what was called in those days a “sports type”. This knowledge was a subconscious certainty somewhere inside me that if there was a fellow in our college who was never going to amount to anything intellectually, his name was Ram Guha.

He would develop his muscles, grow into a hunk, even perhaps wear a turban, and the climax of his aspiration would – to put it with the studied inaccuracy of those mystified by cricket enthusiasts – be to draw Viv Richards out of the crease and bowl him round his legs.

To my mind in those days Ram Guha was someone who could be safely written off and forgotten about. I was not alone in thinking this way. The college we went to was full of bright people who were all mostly determined to join the IAS, and they too seemed to think Ram didn’t stand much chance of becoming a bureaucrat.

In an ironic way, and for the wrong reasons, they were right. We all thought Ram would never make it into the bureaucracy because he seemed keener on the square drive than the intellectual drive, less interested in his present IAS prospects than the future prospects of EAS Prasanna.

But the real reason, which perhaps no one saw, was that Ram was too restless, too passionate, too wayward, and too interested in too many things – such as playing bridge, participating in quizzes, and casually pursuing as many women as possible – to fit into the Procrustean mould that shapes most bureaucrats. So I forgot Ram quite comprehensively for many years until in the mid-1980s we ran into each other quite by chance at the wedding of a friend we had in common.

I was by this time an editor at the Oxford University Press (OUP) and Ram seemed keen to woo me with his passion for the PhD in sociology he’d been working on at the Calcutta IIM. I expressed interest in hearing what he’d been up to and invited him to drop in at the OUP. Some days later, Ram arrived in my office to discuss the book he had in mind.

What he did not know was that I had only invited him out of sheer curiosity – curiosity over why this man who I recalled as the failed reincarnation of Bishan Bedi had been so animated about some Garhwali village where, apparently, the women had taken to embracing tree trunks. Had his failure to make it to the Indian Test team as a spin bowler bowled him clean out of his own mind?

You can imagine my surprise at our meeting, during which a man I’d by now mentally certified as a lunatic at a loose end started telling me about how the Subaltern Studies series had helped him understand narratives of dissent that were forged at a distance from nationalism. He spoke also of EP Thompson and someone called Sartono Kartodirdjo, a name so alien and impossible to pronounce that it could only have been of some exalted foreign academic.

The realisation slowly dawned on me that the man in my office had turned himself into a scholar. It seemed a bad case of spin taking another turn: the Ram I’d seen worship at the altar of Bishan Singh Bedi and Gundappa Vishwanath was now worshipping at the altar of Chandi Prasad Bhatt and Sunderlal Bahuguna. It was a transformation nearly inconceivable, most unanticipated, and quite absolute.

I did not foresee then that this was only the first of several radical changes of direction in Ram’s intellectual life. Nor was The Unquiet Woods, Ram’s first book, which was published by the OUP in 1989, something that either I or anyone else at the time could have seen for what it was – the starting point of the unusually variegated career of a writer and intellectual.

My recollection of it thirty years on is still sharp – because of the exceptional clarity and accessibility of the prose in which it was written. Having edited the early volumes of Subaltern Studies and Ranajit Guha’s Elementary Aspects of Peasant Insurgency, I was just about getting used to the somewhat arcane terms in this kind of Indian history-writing about protest and dissent, the only greatly readable exception to the general trend being the prose of David Hardiman who, like Ram, seemed interested in an audience not confined within cloisters.

The prose of these two seemed to me modelled on a template traceable back to EP Thompson, in those days perhaps the important historian in the intellectual genealogy of every liberal and left historian. For my humdrum editorial purposes when facing the script of Ram’s first book, this was a wonderful lineage because it emphasised a vital interpenetration of complexity of thought and clarity of expression, which basically meant that I as editor had to do very little work as far as straightening out prose went.

In fact, in Ram’s writing ever since I have found very little that needs straightening out because he instinctively stays clear of obscurity. In his first monograph, though matters were frequently complex and complicated, the prose was never gratuitously “complicating” issues – an activity academics had begun taking a fancy to around then. His arguments and analyses were never the sort that could only be unravelled and properly understood by an intellectual elite already thoroughly immersed in the literature.

Ram was writing from the start for seriously interested and ordinarily intelligent readers, unswayed by the value fashionable academics put on fatuous obscurity. This partly accounts for the considerable success even of his first book, despite it being on a specialised subject. 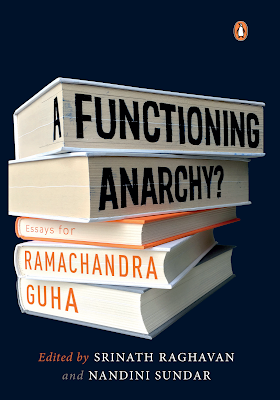 Excerpted with permission from ‘The Unquiet Ram’, by Rukun Advani, from A Functioning Anarchy: Essays for Ramachandra Guha, edited by Nandini Sundar and Srinath Raghavan, Penguin Books India.