Magic of Konkona Sensharma: A powerhouse performer who we're glad is an actress, not a 'star'

"I'm an actor, not a star. Stars are people who live in Hollywood and have heart-shaped swimming pools." -- Al Pacino

Konkona Sensharma is not a star who is popular for her airport looks or who makes headlines for her Instagram videos, she is an actor who is known for gracefully exploring the arthouse independent genre to its best capacity; the one who--with her electric choice of films--has carved herself a niche in the world of showbiz.

With a plethora of offbeat films in her kitty, she has always proved that her acting skills are par excellence.

She is once again making fans go gaga over her stellar performance in Geeli Pucchi, one of the short films from the anthology Ajeeb Daastaans. In the film directed by Neeraj Ghaywan, she essays the role of a Dalit factory worker Bharti Mandal whose job and promotion are at stake after a pretty upper-caste woman Priya Sharma (played by Aditi Rao Hydari) joins the company. Her friendship with her also has some ups and downs. 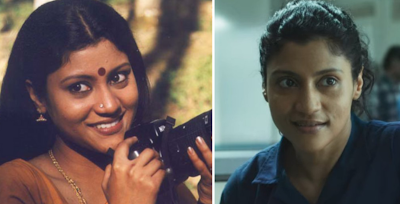 But this isn't the first time she has left us floored. She has effortlessly stepped into the shoes of the characters that she has played in a variety of films as if they were all written for her.

She first shot to fame with Mr. and Mrs. Iyer, a film directed by her mother filmmaker–actress Aparna Sen, for which she National Film Award for Best Actress for her impeccable performance. Her nuanced performance as Brahmin woman Meenakshi is still etched in the hearts of those who watched the film as Sensharma effectively conveyed the emotions without saying much in the film.

However, she only gained prominence with Page 3 in 2005 with the role of Madhvi Sharma, a Page 3 journalist. The film fetched her the limelight of mainstream cinema and Bollywood.

"I believe that any good idea can change the world. Now, all films are not meant to be thought-provoking but some of them are, surely!"

In Vishal Bhardwaj's Omkara, she essayed the role of Indu, Lagda Tyagi's wife, who seeks revenge from Omi, she was praised by one and all. So much so that she received a national award for best-supporting actress.

She won us over with Wake Up Sid, in which she plays Aisha, a guardian to Ranbir Kapoor’s man-child Sid. Just like Page 3, this too was a commercial hit. Similarly, in Atithi Tum Kab Jaoge, she taught everyone a new way to do comedy with her impressive performance.

It was a treat to watch her as Chutki in Laaga Chunari Mein Daag. In Luck By Chance, she made her presence felt with her impressive acting, even though she wasn't the central character.

She has been doing women-centric films from a time when they weren't even popular. She has carried many films on her shoulders without the need of a "hero". Talvar, Lipstick Under My Burkha, Dolly Kitty Aur Woh Chamakte Sitare and Ramprasad Ki Tehrvi are just some of the films through which she has broken barriers and stereotypes. She took a bold move and captured taboo subjects like sexuality in her films.

With the plethora of roles that she has played, she has never been typecast.

She has proved that she is as great behind the camera as she is in front of it. She donned the director's hat with unmatched ease in A Death In The Gunj, the film that premiered at the prestigious Toronto International Film Festival.

"When it comes to portraying women on screen, we hardly see any representation of women over 30. So does that mean we don’t want to know about women once they cross 30 and have a husband and children?"

She has often enlightened us with her intelligent and progressive take on life. It is always a learning experience to watch her films or to watch talk about general things.

"I do believe that life is a series of distractions from death. The only certainty is that you have to die, so do things that make you happy. At the end of your life, you will not remember your best work, but will remember just moments with people."

She is fearless too. When Indian celebrities were being trolled for their identical tweets during the farmers' protest, she fearlessly took to Twitter to say that they are all a victim of "fear".

When it comes to Bollywood or cricket celebs doing what they're doing, I wonder, is it the carrot or is it the stick?

They're rich enough to not be bribed, so it must be fear of some kind. What kind?

I hope some insider reveals the full story one day.

Her personality is indeed unlike any star. She is not the kind of actress who sees how she can change the script so that it fits her personality or image. She is the kind of actress who gets excited to play different roles that demand her to experience a new character in reel life. Every time she appears on the big screen, she leaves us bowled over.

We are glad that she doesn't have the aura, charisma and personality of a star, but the dignity, candor and maturity of a power-packed performer. After all, she has given zero bad performances till date.