A revolutionary reformer, a path-breaking poet, a writer par excellence, a brilliant editor, an inspirational sage who institutionalized teaching with passion and an institution unto himself, Veda Vyasa is one of the central names in Indian spiritual tradition. He can be referred to as ‘the first nation builder’ for his creation of the teertha-yatra pilgrimages, for ‘chitta-shuddhi’ (cleansing of the mind), that prepared the ground for national unity and as someone who changed the face of a nation that is known for its spiritual philosophies and practices even in contemporary times.

Veda Vyasa’s extraordinary achievements are evidence that those who came from the Dalit and lower-caste communities have helped Hinduism revolutionize, reorganize and reform. Krishna Dvaipayana Veda Vyasa was a product of one of ancient India’s first inter-caste unions, born to a sage, Maharishi Parashara, and a fisherwoman, Satyavati. No one would have thought that this son of unequal parents would go on to represent Hinduism and its tenets. Every year, Vyasa’s birth anniversary is observed as Vyasa Purnima (full-moon day), also known as Guru Purnima in the month of Ashada (July–August) of the Hindu calendar. The day is dedicated to gurus or teachers.

The apple does not fall far from the tree, and Veda Vyasa’s father, too, was a sage recognized for his immense knowledge and self-realisation. He worked tirelessly to bring order and cooperation between the different sections of society by travelling extensively and setting up ashrams to impart positive values at a time when there was a lot of discord in society and little respect between communities and castes.

Right from the time he was a child, Vyasa had a strong urge to transcend the limited and the meaningless, and venture into the unknown realms of infinitude armed with a universal outlook. He set out to present the ancient wisdom of the past in a way that it could be appreciated and absorbed by all. During his young years, there was no one equal to Vyasa. He was intelligent, with a high grasping power, learning and absorbing what his father, his guru, taught him.

Vyasa was deeply committed to the service of mankind and wanted to disseminate knowledge among people. Due to his relentless contribution to Hinduism in which he outlined that knowledge was vital for self unfoldment, the positive impact of which is felt even today, Vyasa can be considered one of the most daring religious revolutionaries to have appeared in Hindu cultural history. His work has had a tremendous impact on scholars, thinkers and seekers from across the globe. In the words of German Indologist Paul Deussen:

It was Vyasa, equipped with an incomparably astute intellect, who decided to give humanity the categorized and documented version of the Vedas, India’s immense book of knowledge that had, until then, had only been shared orally. To compile and document that was an onerous task. His mission was not an ordinary one. He had perhaps realized that there was a definite need to pen down the treatise amid forgotten traditions and calamities, such as famines, as it would prove beneficial for the generations to come. The visionary sage not only compiled the Vedas but segregated it into the four parts that it is known to have today, namely the Rig Veda, the Yajur Veda, the Sama Veda and the Atharva Veda.

However, the systematic thinker in Vyasa was apparently not satisfied with merely classifying the entire wealth of Vedic knowledge into four volumes; in each volume he also brought about a harmonious rhythm, both in the arrangement and the classification of the contents. He divided each of the four volumes roughly into four sections: Mantras (chants or hymns), Brahmanas (rituals and rules of conduct), Aranyakas (methods of subjective worship) and Upanishads (philosophical revelations).

Arthur Schopenhauer, a German scholar who was widely read before the Second World War and discussed in public newspapers and magazines, saw in the Upanishads the ‘fruit of the highest human knowledge and wisdom’ and in their introduction into the Western world ‘the greatest gift of the century’. In his writings, Schopenhauer confessed that reading the Upanishads had been the joy of his life and later the consolation at the hour of his death. According to him, this was such a great legacy to mankind because its study purified the mind like nothing else could.

Vyasa was an original thinker with astounding faculties of insight and foresight. In the words of Swami Chinmayananda, one of the first spiritual teachers to expound the knowledge of the Upanishads in English, ‘Vyasa was one of the sages who had a vast vision of the past and the great imagination to see the future, both of which he brought forth in order to tackle the problems of decadence in his immediate present.’

Vyasa’s quest to present knowledge in simplified and easily comprehensible forms was both refreshing and relentless. He seemed to be of the belief that there could always be more creative ways to reach out to people. And to accomplish that, he perhaps decided to travel extensively, engage with and speak to various sages, cutting across the length and breadth of the nation, to write the Puranas (mystic stories based on ancient India). Vyasa compiled and wrote all of the eighteen puranas. In Vyasa’s work, one can find a unique harmony of technique, plot development, character portrayal, description of nature and cultural connections. In other words, he was the greatest producer of potboilers of the time!

David Frawley, author, teacher and founder of the American Institute of Vedic Studies, has said, ‘As such, Veda Vyasa developed the foundation for Hindu dharma as it endures to the present day, with its main deity forms, philosophies and yogic paths. Yet Veda Vyasa stayed in the background and never made himself into an object of worship.’

One of Vyasa’s most applauded works is the Mahabharata. Along with the Ramayana, this epic poem is one of Hinduism’s most eminent works. The duo lies at the core of Indian national identity and culture, spanning millennia.

Set against the backdrop of the Mahabharata, Vyasa also produced one of India’s ‘FAQ’ handbooks—the Bhagavad Gita—which teaches human beings how to practically live the subtle philosophies of everyday life. The Bhagavad Gita occurs in the Bhishma Parva of the Mahabharata, comprising eighteen chapters. It is Veda Vyasa’s sheer brilliance that he translated subtle Vedic maxims in his unique way, against the intricacies of politics and the edginess of a family feud. 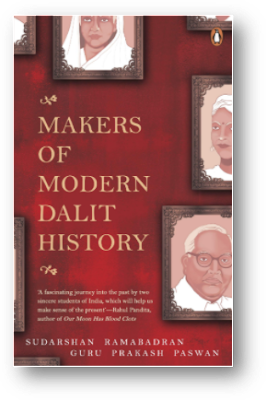 This excerpt from ‘Makers of Modern Dalit History’ by Sudarshan Ramabadran and Guru Prakash Paswan has been published with permission from Penguin Random House India.