Officials on the US West Coast have reported three unexplained coronavirus cases, raising concerns the virus could be spreading within the community.

The patients - in California, Oregon and Washington State - have no known connection to a badly hit country.

A total of 59 coronavirus cases have been confirmed in the US, according to the World Health Organization (WHO).

Meanwhile South Korea, which has the highest number of cases outside China, mobilised the army on Saturday.
Soldiers are disinfecting large parts of Daegu, the south-eastern city that has been at the centre of the country's coronavirus outbreak.

On Friday South Korea reported a sharp rise in the number of cases of the Covid-19 disease. It now stands at 3,150. The respiratory illness has killed 17 people in the country so far.

What is happening in the US?
On Friday health officials in California's Santa Clara County said an older woman with chronic health conditions had been diagnosed with Covid-19.

Officials say she is not known to have travelled to a country badly affected by the virus or been in contact with a person who had.
"This new case indicates that there is evidence of community transmission but the extent is still not clear," said Dr Sara Cody, director of the Santa Clara County Public Health Department.

Neither had any contact with a known case nor any history of travel to an affected region.

These bring the total of unexplained cases in the country to four, after another such case was reported in California in Tuesday.
The Democratic Party has criticised President Donald Trump's response to the outbreak, arguing that he has contradicted his own health officials and tried to downplay the severityty of the virus.

On Friday, the president hit back at Democrats, accusing them of politicising the outbreak. "This is their new hoax," he told a rally in South Carolina.

He accused Democrats of advocating a policy of open borders and said this was "a direct threat to the health and wellbeing of all Americans".

Are those the first untraced cases?
No. Earlier this week a patient who had no known connection with an affected region died in France.

On Friday, a patient diagnosed with the virus in England was said to be the first to catch it in the UK.

The latest developments came as the WHO on Friday upgraded the global risk of the outbreak to its highest level.

But the UN body said there was still a chance of containing the virus if its chain of transmission were broken.

WHO head Dr Tedros Adhanom Ghebreyesus also stressed that fear and misinformation were the biggest challenges to overcome.

What's happening in South Korea?
The spread of the virus there has been linked to the fringe Christian group Shincheonji Church.

Authorities believe members infected one another during services in Daegu and then fanned out around the country, apparently undetected.

South Korean health officials believe that a 61-year-old member of the sect who last week tested positive for the virus was among the first to be infected.

The female patient initially refused to be transferred to a hospital to be tested and is known to have attended several church gatherings before testing positive.

In neighbouring North Korea, meanwhile, leader Kim Jong-un has warned of "serious consequences" if his officials fail to prevent an outbreak in the country. 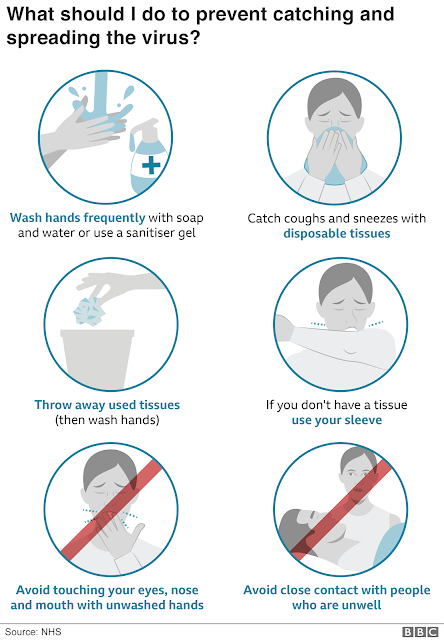 What other developments have there been?