In the land of Waris Shah, Muslims protect Sikh heritage

"This is the land of Waris Shah. It yields nothing but love."

Lying with our eyes closed, within the cold walls and shadows of the shrine, we heard his voice for the first time. Sain, as he was called, was singing verses from Heer, the revered Punjabi poem of Waris Shah.

As he sang in high notes, his voice resonated in the shrine, the dome and its surrounding — as if every soul present was remembering their own Heer. Amid the enchantment, a woman appeared. Making sure no one was watching, she diped her fingers in an extinguished charagh and placed them in her hair, a mark of submission to Waris Shah to plead for her beloved.

The outer wall of the shrine read:
Waris shah mehboob nu tadon paiye
jadon apna aap ganwaiye
(Waris Shah, the beloved can only be attained
When one loses himself)

Taking the Hiran Minar exit from the Lahore-Islamabad motorway, one notices signboards reading pre-Partition names of villages — Lel Virkan, Noshehra Virkan and Buddha Goraya — that continue to exist after more than 70 years. 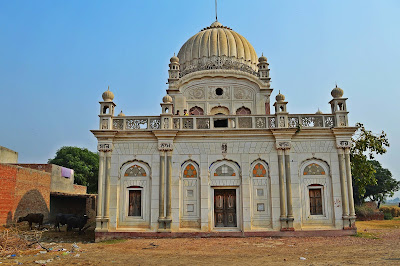 Our destination was Jandiala, meaning 'forest' in Punjabi. This is the Jandiala Sher Khan where Waris Shah was born and Heer was immortalised — and where now stands the shrine of Waris Shah, as lovers and newly-weds visit from all corners to seek his blessings. Ours was a visit to explore the heritage sites around Gujranwala and to fulfill our pledge to start the journey by offering gratitude to Waris Shah.

After doing that, we set off to explore the pre-Partition heritage of the area. While visiting various sites, a marble structure emerged from amongst the trees after a sharp road turn. Seemingly unrelated to the adjacent mosque, the white edifice unfolded its enchanting glory as we moved closer.

Encircled by houses, the entrance to the building was hard to find until a man approached us and inquired about our intentions. Discovering our past affiliation with newspapers and keen interest in the site, Rashid agreed to show us around.

“Ye sikhon ki masjid hai” (This is the mosque of Sikhs), he told us. “We clean it and show it to Sikh pilgrims who visit.”

Rashid was born amongst hundreds of families who came from India after Partition and settled in this region. Hardly remembering his ancestral village, to him Ambala was what he had heard it was from his mother.

“This place is similar to the mosques we left behind in our villages. It gave us shelter and is very important to us,” he said as he opened the main door.

The facade had prominent inscriptions written in Hindi that we failed to decipher. It is when we Googled it that we came to know that this beautiful structure was actually a gurdwara known as Kharasahab or Gurdwara Mattu Bhaike.

It was an important pre-Partition gurdwara established by local affluent Sikhs after 1940 in honour of Guru Hargobind Singh, the sixth Guru, who while passing by this place showed annoyance to tobacco and asked his followers to avoid it.

It was during the reign of Ranjit Singh that Sikhs became influential and consolidated prominent places of worship all over Punjab. Mattu Bhaike, Nowshehra Virkan and the adjacent areas were inhabited by Sikhs who migrated after Partition, leaving their buildings at the mercy of migrants and locals who, in many cases, destroyed the structures and replaced them with residential quarters.

The anterior of the gurdwara was striking — with marble, stone and glass works and beautiful wooden engravings on the doors. It had a samadhi (tomb) whose stucco work and paintings had warped with time. It used to have an idol as well, Rashid told us.

Despite being muddy from the outside, the interior of the building was in decent condition. It consisted of a big, tiled hall on the ground floor that had been used for different religious rituals. The surrounding wooden windows were clogged with dust as if they hadn’t been touched since its occupants left.

There were four entrance doors to the ground floor. On the extreme right were stairs going up. At the top was a small room and a dome with magnificent paintwork. The view of lush green fields from there was heavenly.
It looked like the site was regularly taken care of since nothing had been destroyed or looted. I was informed that it belongs to the Mattu clan who still lives here.

Searching for answers, we went to the Mattu Bhaike village. Not many were interested in talking about Sikhs and their gurdwara. But finally, Ijaz agreed to answer some questions.

Ijaz, in his late 40s, lived next to the gurdwara. “We have been living here for centuries,” he said, while showing us some old documents, including his lineage. “Our ancestors were Sikhs. Later, my great grandparents converted to Islam.” Yet, his cousins remained Sikh.

“Everyone was living peacefully when Partition happened. We decided to stay, but riots erupted in the neighbouring villages and so the Mattu family decided to shift their Sikh cousins and family across the border, while their homes and flocks were put in our custody until they returned.

"However, no one returned. People who witnessed Partition recall the night of the departure like it happened yesterday. The sadness still engulfs every living soul here,” Ijaz recounted as he looked towards the gurdwara.

“My grandfather used to show me the house keys given to him by his friend Inderjeet wrapped in his mother’s shawl, whom they both called bayjee. He was so protective of it that he did not let us so much as touch the house during his lifetime,” he told us.

We asked him about the destruction of Sikh and Hindu heritage sites after Partition and the Babri Mosque incident. Ijaz replied: “The gurdwara has the graves of our forefathers. Some people tried to destroy it in 1992, but the whole village came out to protect it.”

He added, “Mattus are Sikhs and Muslims. We have family across the border who are desperate to see their ancestral village. The pilgrims visited in 1960s for the first time and the entire village welcomed them with food. My grandfather said that Sikhs are his uncles and nephews; our hearts and houses are always open for them. They might be Indians but this is their land.”

“He also used to say to all of us, 'this is the land of Waris Shah. It yields nothing but love'”, Ijaz said with a smile.

For people in the subcontinent, Partition epitomises loss not just of territory, but also of identity. However, there are places like Mattu Bhaike where people refused to let go of their identity and affection towards each other.

Last month, as a goodwill motion, Pakistan handed over the Gurdwara Kharasahab to the Sikh community. With steps like these, including the opening of Kartarpur Corridor, people might finally be able to meet their Heer they have been longing for.