Veganuary bus adverts 'should be removed in Shropshire'

Adverts promoting veganism should be removed from buses in Shropshire because of the county's agricultural history, a senior councillor has said.

Deputy council leader Steve Charmley said in a series of tweets the posters meant bus firm Arriva was being used to promote "fake news of vegangalists".

The adverts, encouraging people to try veganism in January, were paid for by Shropshire Veggies and Vegans.

The adverts for Veganuary, which feature a picture of a cow and a caption about milk production, are being displayed on buses in Telford and Shrewsbury.

Conservative Mr Charmley, who has been deputy leader for more than three years, has called on Arriva to meet him.

He said he did not object to people choosing what they ate but said: "I come from a farming background.

"I know farming is highly regulated, we have some of the highest quality food around the world, responsibly sourced and that conforms to the highest welfare standards." 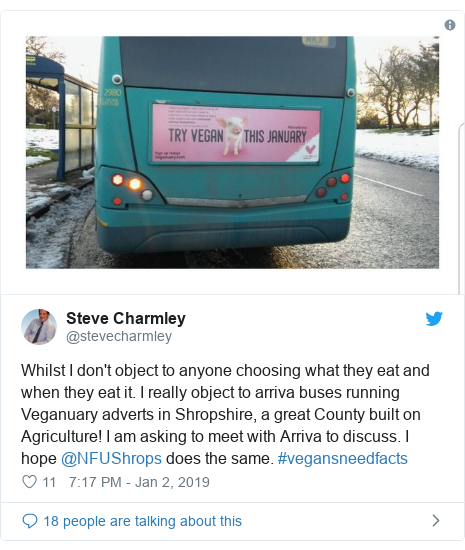 Duncan Jones asked: "Seriously do you think a couple of adverts on a bus is going to affect livestock agricultural in Shropshire?"

Other responses questioned whether the politician was right to suggest censorship of legal advertising.

The row comes in the same week bakery chain Gregg's launched a vegan sausage roll, which gained publicity when Good Morning Britain presenter Piers Morgan reacted with apparent outrage - in turn prompting a barrage of criticism over his stance.


Nobody was waiting for a vegan bloody sausage, you PC-ravaged clowns. https://t.co/QEiqG9qx2G
— Piers Morgan (@piersmorgan) January 2, 2019


Ms D'Arcy Jewell said this was the second year adverts had run on buses in Shropshire. She said the campaign was designed to get people thinking about veganism and received a largely positive response in 2018.

"There is no reason we can't feel proud of that agriculture."

Arriva said the third party that runs its advertising worked with the company to ensure campaigns did not cause offence and was looking into the issue.

It said it would be happy to meet Mr Charmley.

A year ago this week, a chef at a restaurant in Shropshire offered her resignation after claiming on Facebook she had "spiked a vegan".