In 1953, Shakuntala A Bhagat, the daughter of a bridge engineer was the first Indian woman to obtain a civil engineering degree from Veermata Jijabai Technological Institute in Mumbai.

She was the pioneer to research and develop bridge superstructures. Along with her husband, Anirudha S Bhagat, who was a mechanical engineer, the duo jointly evolved the first-ever total systems approach in this field. This involved using standardised, modular parts applicable across various types of bridges of different traffic widths and load-bearing, merely through permutations during assembly. 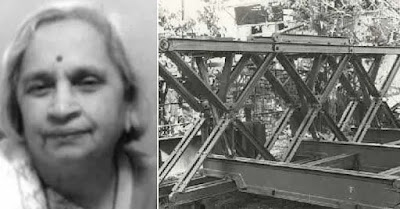 The Quadricon steel bridges are popularly found in the Himalayan region where other bridge technologies are impossible to implement. So how did it all begin?

In 1960, Shakuntala earned her master’s degree in civil and structural engineering from the University of Pennsylvania and went on to teach as an assistant professor of civil engineering and head of the heavy structures laboratory at the Indian Institute of Technology in Mumbai.

In 1970, Shakuntala and her husband launched their firm — Quadricon, a bridge construction firm specialising in their patented prefabricated modular design.

According to reports, most of their innovations originated through observations of the critical needs of society. By evaluating the scopes for improvements they were able to make overall developments in the field of civil engineering.

Shakuntala has worked on the design and construction of hundreds of bridges around the world, including projects in the United States, Germany, and the United Kingdom. She has researched concrete for the Cement and Concrete Association of London and was a member of the Indian Road Congress.

Projects carried out by Quadricon

With their patented innovation, a total systems approach, the company built its first bridge in 1972 at Spiti, Himachal Pradesh. Within four months, they were able to construct two small bridges. At the same time, the word about their technology spread across other districts and states. By 1978, the company had built 69 bridges from Kashmir to Arunachal Pradesh.

According to reports, all these projects were undertaken with funds raised at personal risks. Investors, including government departments, were reluctant to invest because the company was involved in such a complex R&D which even advanced countries hadn’t taken the effort to conduct.

Till date, Shakuntala and her husband have designed over 200 Quadricon steel bridges.

Though steel is an ideal construction material, it was being eliminated from adoption for the construction of bridges because of the inefficient connecting and jointing systems, which continues to exist, such as riveting, bolting, and welding.

Keeping its limitations in mind, in 1968 Quadricon developed ‘Unishear Connector’ — an ideal structural jointing device for steel structures. For the same, in 1972 Mr and Mrs Bhagat were awarded the highest award from the Invention Promotion Board.