And by all accounts that includes telling them they’re not welcome at your wedding if they’re manipulative and bigoted towards your chosen partner.

One future bride has taken to Reddit to ask if she’s the a**hole for wanting to do just that.

User Clemthecat explained to the forum that her fiance and she had been dealing with a conflict with her parents for just over a year:

My fiance is on the autism spectrum, so sometimes has difficulty with social etiquette, relationships, body language etc.

My family has been aware of this for years, even before we started dating.

Her father has reportedly argued with him in the past over minor disagreements in which he accused her fiance of being "arrogant". 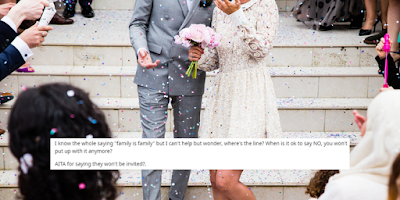 More recently, an incident occurs where my fiance tries to have a discussion with my parents about a book that his mom (who is a parenting author) just released.

My dad felt offended by this and thought that my fiance meant they were no good at parenting. He went on to yell at the both of us, swearing and calling my fiance names including "retard" (which he took offence to given his diagnosis. My father knows this).

Most recently, her parents took issue with a joke her fiance made on Facebook asking if her sister's baby belonged to her.

Sometimes he doesn't understand that jokes can have "wrong" audiences and jokes can be badly timed. My parents didn't give him that grace and sent us messages about how his behaviour seems to be reckless and potentially dangerous and the comment was shameful.

'My mom's message said they did not give their blessing for my engagement. My father's text said the same thing but also included 'Are you really trying to tell me that boy/man with all his mental deficiencies is really good for your life??? That's a tough sell my dear.'

Understandably, she told her parents that if they did not approve of her choice, they shouldn't attend the wedding.

I chose not to respond because I felt like it was aggressive. Today I sent a message to my mother to convey my thoughts and make some things clear to her. In it I said that if they didn't give their blessing, they shouldn't expect an invitation to our wedding.

However, her sister has since got involved, to argue that she is being disrespectful to their parents who "gave them a great life".

The people of Reddit reassured her that despite her sister's anger, the bride-to-be was doing the right thing.

Family is family is something that abusive family members say to get people to accept their otherwise unacceptable behaviour. Its love before blood, not the other way around.

Every murderer, rapist, a**hole, and just general piece of shit in the history of the world has been related to someone. Just being family is basically meaningless. How that family treats you is everything.

Reassuring her that she is definitely not the a**hole in this situation, another poster wrote:

When is it ok to say you won't put up with it anymore? Right now. It's your choice. You don't need anyone's permission. I think it's great you are standing up for what you want and your parents are out of line. NTA.