Clad in a bright-red bridal sari, Kareena Kapoor rides her scooter down a narrow strip of white sand. Aamir Khan, her estranged lover, looks on in shy surprise. They reunite; lips lock. All around them, glistening blue waters lap a sweep of frosted mountains.

Everyone remembers the scene.

In 2009, 3 Idiots, a film about three engineering students propelled by Bollywoodian misadventures to chase their dreams, launched Ladakh into public imagination.

"It all started with that movie."
The perilously mountainous desert crowning Jammu and Kashmir had been featured in movies before.

But the mainstream release of 3 Idiots – the highest-grossing film of its day – opened up the often overlooked corner of the country to a new generation of Indians.

Three years later, those figures were almost quadrupled. They've shown no signs of slowing down since.

“It all started with that movie,” says Noori Noorjahan, an art restorer from Leh, Ladakh’s tiny, oxygen-starved capital. 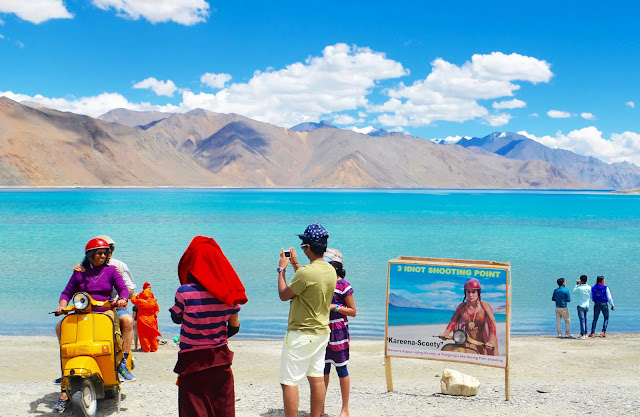 Call it a testament to Ladakh’s stark, haunting beauty or to the film’s irresistible denouement, but seven years later 3 Idiots still ushers in thousands more tourists than the region’s fragile ecosystem can support.

A woman searches for her son. They had arranged to meet in Rancho’s Cafe, named after the film’s cheeky hero, but a half-dozen restaurants all bear the same name.

One features life-sized cutouts of Kareena and Aamir dressed as Ladakhis.

Near the water, tourists climb atop a mustard-yellow scooter, posed as photo op. It looks just like Kareena's.

Ladakh’s tourism boom has coincided with the precipitous rise of India’s middle class. From 2005 to 2010, annual income levels almost doubled.

The country’s middle class now includes some 50 million people — by 2025, it will number 583 million — and salaries are slated to triple over the next two decades.

In Leh, half-built guesthouses crowd the poplar-lined streets, adding to the city’s thousand or so existing hotels. 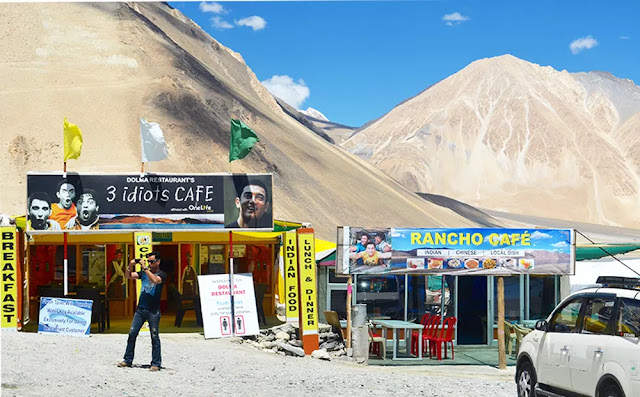 “[We] used to drink from the streams – now you wouldn’t even want to put your hand in them, let alone your mouths,” says Yangchan Dolma, 64, vice president of Women’s Alliance, an NGO that has fought for bans on plastic bags.

Outside the city, fleets of white Mahindra vans, all bound for the same destinations, chug up trash-lined mountain roads.

“I think it’s a good thing that Indians are finally seeing their country,” says Nariman Vazifdar, 35, a wildlife expert from Mumbai.

But damage to local species, many unique to the region, gives him cause for concern.

“If you destroy the ecosystem more and more, with garbage, plastic, you’re going to lose these animals.”

Tourists toss chips and crackers to marmots and brown-headed gulls. 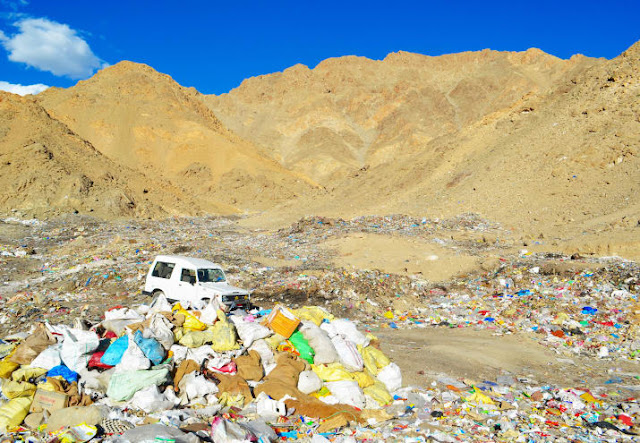 Some take their cars off-road, roaring across the surreal moonscapes that Ladakh is now famous for — vast, sandy hollows of land that look eerily lifeless.

In fact, many small mammals, lizards and other ground-nesting birds build their shelters under this very land.

“People are not aware of the fragility of the ecosystem,” says Dr Tsewang Namgail, director of the Snow Leopard Conservancy-India Trust. “They just drive everywhere in their cars … Some crazy people drive their SUVs in the water.”

These cars, Namgail says, can destroy the topsoil, robbing the animals of their homes.

Sure enough, within my first hour at Pangong Lake, I see a white jeep charge into the shallow bank.

Dappled by light, the lake reflects a dazzling mosaic of blues and greens. Snow-dusted mountains loom dreamlike in the distance.

And a crushed Coke can bobs slowly near the shore.

“It’s a fashion, you know," says Stanzin Dorjai Gya, an environmentalist filmmaker whose documentaries tackle the impact of breakneck development on Ladakh’s culture and climate. "Where the Bollywood actors make singing and dancing. They go there, take a photo, and come back.”

When it was still closed to outsiders, Ladakh produced zero waste.
To illustrate the scale of Ladakh’s environmental crisis, Dorjai takes me on a tour of backstage Leh.

On the outskirts of the city, a massive landfill, overrun with wild dogs, hides Leh’s garbage from view. 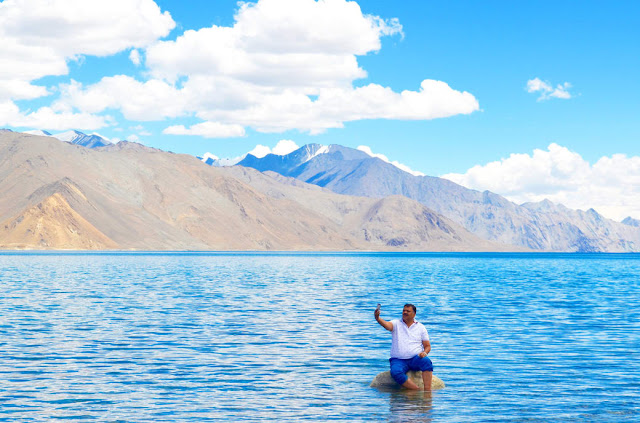 It spans several valleys. “Leh is clean,” Dorjai says. “Because everything comes here.”

Nearby, the stiff legs of a dead animal protrude from a heap of old wrappers.

Mounds of technicolour garbage cast long shadows under the sun, as Kashmiri trash-pickers survey a cascade of plastic bottles.

“They are heroes,” Dorjai says. No one else bothers to sort the dump.

In high winds, trash plasters the nearby village of Saboo. “We do a garbage clean-up every year,” one resident tells me. “But it just keeps growing.”

A decade ago, garbage trucks came eight times a day to unload waste. They now make 20 trips per day. Hotels and tourist restaurants are the main trash producers.

When it was still closed to outsiders, Ladakh produced zero waste. Melted snow brought clean, irrigated waters to each household.

And until new road connections opened the market to packaged goods, Ladakhis lived off their own produce.

“We were fully sustainable,” Dorjai tells me. “You can’t imagine the quality of life. … After that, more and more tourists came.”

“This is the rise time of Ladakh. But we’re going to fall.”
Rural homestays have attempted to divert the concentration of tourists from Leh and Pangong while redistributing revenues to remoter regions.

But everyone agrees more work is needed to thwart a worsening crisis. Visitors must be sensitised to the vulnerability of the region, while tourist practitioners need to realise that when their product disappears, so too will their profit.

“Every rise has a fall,” cautions Noorjahan, the art restorer. “This is the rise time of Ladakh. But we’re going to fall.”

I visit Mehboob Ali, assistant director of the Tourism Department in Leh, and ask why the government has yet to put restrictions on Ladakh’s tourist surge.

He rubs three fingers together. Money.

“In the name of development, money, employment, we are totally disrupting the natural beauty of Ladakh,” Ali says.

“It happened all of the sudden. … Even Aamir Khan himself was not sure that Ladakh would get that much publicity.”

Before I leave, Ali asks if this is my first visit. He looks pained when I nod. “I wish you could have seen Ladakh before,” he sighs.

(Source: Buzzfeed)
Posted by Arjunpuri at 10:00 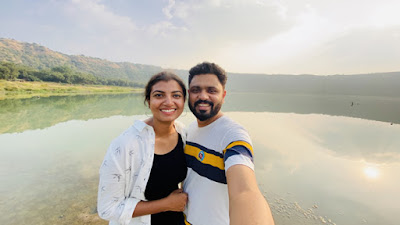