Here's an interesting read on NYT magazine written by John Lanchester on what the West can learn from Japan about the cultural value of work. I feel it's not just the West, but other countries can also learn from this little country. Read for yourself and decide: 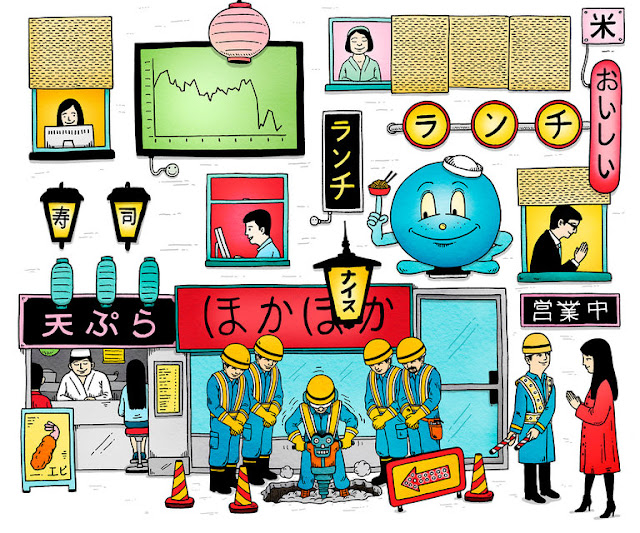 A few weeks ago, in a Kyoto tempura bar, I watched a lone chef, a man in late middle age, cooking behind a counter for his 11 customers. The set menu had 15 items on it. That meant that at any given moment, he was keeping track of 165 pieces of food, each subject to slightly different timing and technique. He wrote nothing down and expended no apparent effort. It was a demonstration of total mastery. This didn’t look so much like a job as a life: His work was his whole being.

That’s a thing you notice in Japan, the deep personal investment people make in their work. The word shokunin, which has no direct translation, sums it up: It means something like “master or mastery of one’s profession,” and it captures the way Japanese workers spend every day trying to be better at what they do.

Shokunin culture can have a side that, to those of us raised on a more brutally capitalistic worldview, verges on the ridiculous. Outside the Sanjusangendo temple in Kyoto, I saw a man standing with a yellow glow stick, pointing pedestrians toward the sidewalk instead of to the parking lot nearby. Presumably, if a vehicle had come, he would have pointed it toward the lot. “That guy is basically a sign,” my son said. He was right — and this was a job you often see in Japan, often in relation to vehicular access: a person performing a job that in any other developed society is either automated away or ignored.

On another occasion, while waiting at a bus stop in the seaside city of Kobe, I found myself watching a group of five men who were drilling a hole. Or rather, one of them was; the other four were watching him. For the whole 30 minutes, that’s all they did. But they didn’t do it reluctantly, or while checking their smartphones, or gossiping, or anything. It was like a demonstration: “All other techniques for watching a guy dig a hole are incorrect. This is how you watch a guy digging a hole.”

“People whose jobs involve literally doing nothing,” an American teacher said to me after I got off the bus and described this scene. At the time, though, I was left thinking something different: that what I saw were people who had a strong feeling that their work was meaningful. For these workers, the value they attached to work wasn’t simply its economic value to them. A train conductor bows on entering and exiting a train compartment; a department-store worker does the same thing coming or going from a shop floor, whether observed or not, whether the store is heavingly busy or almost deserted. It’s clear that there are deep cultural differences at work here, not all of them benign; the reason Japanese has a word for “death from overwork” is because it needs one. You could even argue that work has too much meaning, is too freighted with consequences for individual identity, in Japan.

Among economists, Japan is a byword, a punch line, a horror story. The boom of the late ’80s and early ’90s — during which it became popular to imagine a Japan-dominated economic future, the subject of Michael Crichton’s thriller “Rising Sun,” for instance — was followed by a spectacular stock-market crash. The Nikkei share index hit a high of 38,957 on Dec. 29, 1989. Over the next two decades, it fell 82 percent. Twenty-seven years later, it is still only at less than half that 1989 value. Property values crashed along with share prices, which turned large parts of the financial system into zombie banks — meaning banks that hold so many bad assets that they are essentially broke, which means they can’t lend money and therefore cease to fulfill one of a bank’s central roles in the modern economy, which is to help keep the flow of credit moving.

The Japanese economy ground to a halt. Inflation slowed, stalled and turned to outright deflation. Add Japan’s aging and shrinking population, contracting G.D.P. and apparently unreformable politics, and you have a picture of perfect economic gloom.

It doesn’t feel like that when you visit, though. The anger apparent in so much of the developed world simply isn’t visible in Japan. A student of the culture would tell you that public displays of anger are frowned on in Japan; a demographer would point to the difficult prospects faced by young Japanese, paying for an older generation’s lavish health care and benefits that they are unlikely ever to enjoy themselves. The growth numbers would seem to imply a story about stagnation. But unemployment is almost nonexistent — at 3 percent, it’s among the lowest in the developed world. The aging of the society is visible, but so is the distinctive liveliness of the various youth cultures. I’ve been to plenty of stagnant places, and lived in one or two as well, and contemporary Japan isn’t one of them.
Why? A big part of the answer, I think, lies in the distinctive Japanese attitude toward work — or more specific, toward meaning in work.

Work is good, but meaningful work is better. I wonder whether our shiny new Western world of work — post-manufacturing, un-unionized, gig-based, insecure — offers as much sense of meaning as work once did, or as it still seems to in Japan. In Derek Walcott’s epic poem “Omeros,” a wide-ranging reimagining and mash-up of Homer’s Aegean and the contemporary Caribbean, he writes admiringly and respectfully of his protagonist, Achille, a St. Lucian fisherman. Achille is a man “who never ascended in an elevator,/who had no passport, since the horizon needs none,/never begged nor borrowed, was nobody’s waiter.” Near the end of Walcott’s long, meditative, elusive poem, that line gave me a jolt. What’s so bad about waiting tables? Is there really something so lessening, something analogous to begging or borrowing, about being a waiter?

The answer to that question for lots of people is yes. This isn’t a general human truth about workers at all times and in all cultures, because there are places where waiting and where service in general are deeply respected jobs. But it’s apparent that the new service work has many people doing things that aren’t congruent with their sense of their identity. A life is the story of a life, and that story, for many, has become one of decline and loss, of reduction in self-esteem. The tension in status between different types of work is one theme of Karl Ove Knausgaard’s “My Struggle” — indeed, that is essentially what his struggle is, the gap between the narrator’s sense of what he should be doing, as a writer, and what he actually does all day, as a homemaker: “Clean floors, wash clothes, make dinner, wash up, go shopping, play with the children in the play areas, bring them home, undress them, bathe them, look after them until it is bedtime, tuck them in, hang some clothes to dry, fold others, and put them away, tidy up, wipe tables, chairs and cupboards.”

It’s sometimes said that the value of manufacturing work is exaggerated, and that we should just get used to the idea that most jobs are now in service industries — which is probably true. But unionized manufacturing work gave a sense of community and meaning that more atomized, more modern, more service-based work struggles to do. It doesn’t matter that many of those old jobs were boring, or brutally repetitive, or dangerous, or made workers sick — or, like coal mining, all of those things simultaneously. In the 1937 speech where Franklin D. Roosevelt called for “a fair day’s pay for a fair day’s work,” he stressed that “the overwhelming majority of our population earns its daily bread either in agriculture or in industry.” Hard manual work created tangible products, and that tangibility was part of what made the work seem meaningful. Miners and autoworkers, laborers in the clothing and electrical and transportation industries, had a social cohesion based on the fact that they worked and sweated and lived and suffered together, creating a tangible product that seemed to them imbued with national, even world-historical, significance. I won’t pretend that I wish I did that kind of work, but I envy the feeling of cohesion and solidarity shared by people who do.

p.s: John Lanchester has written eight books, including the novel “Capital” and, most recently, “How to Speak Money: What the Money People Say — and What It Really Means.”