Day 1: In God’s Own Country

Waited for a long time to witness a Christian wedding and it was special because it was a Syrian Christian wedding, that too in the God’s own country Kerala. When Vijith  wanted to take me for the wedding of his friend in Kolenchery in Kottayam I was more than happy.
Rivers meandering past the houses and paddy fields, exchanging pleasentries with the people washing clothes, the long regiments of coconut trees giving an impression of guarding the endless stretch of paddy fields flashed in my mind.
We reached Kottayam around 9 am in the bus last Saturday, travelling almost 12 hours from Bangalore, and took a room at Indraprastha hotel

to freshen up, while Rajeshattan and his wife Viji headed towards their home. After eating Masala Dosa (they called it so) I thought how good our Masala dosas are in Karnataka.
Waiting for Rajeshattan to turn up, I had a naqp in the room and at last, the couple arrived around 2 pm.
Leaving the hotel, we went to see CMS College, the oldest college in Kottayam. Founded by the Church Missionary Society of England in 1817, it is the oldest of the institutions for higher education in South India. Rajeshattan and his parents studied in this college and Rajeshattan became nostalgic about his college days.
The college looks like a traditional Kerala house and the campus is considered to be one of the most natural campuses in Kerala. The different departments are housed in separate blocks, a unique feature of the college. With neatly laid out roads and lawns, the college campus sprawls in about 35 acres. clean road inside the college campus
Recently, Malayalam movie Classmates was shot in the campus.
At present, the College is affiliated to Mahatma Gandhi University CMS COllege, Kottayam
The alumni of the college include former President of India Dr K.R. Narayanan, formulator of Indian foreign policy K.P.S. Menon, former ambassador to China Sardar K.M. Panicker, renowned physicit Dr E.C.G. Sudharshan, former judge of the Supreme Court Justice K.T. Thomas, chief editor or Malayala Manorama K.M. Mathew, former chief minister of Kerala Oommen Chandy and others.
About eight acres of the campus is maintained as a forest, which houses a large variety of plants and animals. This patch of forest with its rich bio-diversity acts as the lungs of the town.
Rev. Benjamin Bailey was the first principal of The College, COTTYM, as it was called and spelt then.
Earlier, the curriculum included the study

of Latin, Greek, Hebrew, Mathematics, History and Geography besides English, Malayalam, Sanskrit and Syriac. In 1838, the college was shifted to the wooded hillock, the present site, commanding views of the distant Western Ghats. Rajeshattan remembered told us that one of the oldest buildings in the campus is Room 52 or “Grammar School” as it was named then.
The college provided free education to all the students until 1855 when the fee of 1 rupee a month began to be collected from each student.
Today, the college has 14 departments with 47 courses and six research centres.
Was feeling damn hungry and we headed towards Family Toddy Restaurant. The hotel on the roadside with a dhaba look was crowded. Rajeshattan told us that the place is famous for kallu (toddy) and families visit the place to drink it. Even women don’t mind to savour it! The smell of fish curry was so much that we were forced to sit outside for the lunch. Not that they are not used to it, but I was not used to it. The smell was unbearable for me. Came to learn from Rajeshattan that families take pictures standing outside the hotel and women don’t hesitate to pose for the camera in front of a kallu shop (he pronounced it as ‘shaap’, the typical Malayali pronunciation of the shop). ducks in the backwaters
After hearing so much of, wanted to see the menu and worried if there will be only kallu to drink and fish to eat in the place and nothing else for me! Karimeen fry
The person came to take the order, and then went the list from Rajeshattan to him – Kallu,  Karimeen (Karimeen is known as Pearl Spot in English and is found in abundance in the warm, brackish waters of the lakes and backwaters of Kerala and is considered a delicacy by fish lovers), Taravu (duck), Kappa (tapioca), Chicken, Kallappam and Palappam. Karimeen or Pearl Spot Fish
They got the kallu in an earthen pot, kept in the fridge. The drink looked like buttermilk and after my hubby forced me to taste it, I just took a sip from his glass and it tasted like a mixture of buttermilk and tender coconut. It tasted well and I didn’t want to take any risk by having it, as I never drink alcohol.

palappam
I liked Kappa and chicken fry and tasted little Taravu and Karimeen for the first time in my life. kappa
Rajeshattan told me that duck is considered to be cold and chicken hot for our body.
The place is best known for its toddy and karimeen curry and I came to know that they wash the fish with vinegar and salt to avoid the smell. And the fish really didn’t smell fishy! The best part came when the bill came and a single Karimeen fry was ONLY RS 200! The same will be available at other hotels

for less than Rs 75, but with the fish smell. There goes the secret of this toddy shaap. Ask in the market for 1 kg Karimeen and you will get it for less that Rs 175! After the lunch, we went to the house of Paapi (Rajeshattan’s childhood friend) to pick him for the wedding along with us. house seen on the other side of the backwaters from the house of paapi
It was on the banks of a river provided a perfect background for our photograph. Paapi and Rajesh
Later, we went to Motel Aaram in Vaikom on the Vembanad backwaters. Near to the hotel

is the famous Vaikom Memorial. Vaikom Memorial Hall
Vaikom is a small town on the eastern banks of the backwaters of Vembanad Lake. Fishermen in the Vembanad Lake
The town is famous for its Shiva temple, which in the early twentieth century was the citadel of orthodoxy and casteism. And we couldn’t visit it. As was the custom prevalent in those days, the Avarnas were not allowed to enter the temples. But at Vaikom , they were not permitted even to use the public roads around the temple. Notice boards were put up at different spots prohibiting the entry of Avarnas reminding them of their social inferiority. All the more unbearable to them were the fact that a Christian or a Muslim was freely allowed on these roads. An Avarna had to walk through a circuitous route, two to three miles longer to avoid the road beside the temple. Fishermen busy catching fish in the Vembanad Lake
Saw a few lorries filled with sand and other vehicles being ferried to the other side of the Vembanad Lake. Rivers and backwaters in Kerala are like our state highways and national highways. People still use waterways to move from one place to another using small canoes or motor boats.
While the trio indulged in their drinking session in the motel, I kept myself busy in capturing the dusk engulfing the vambanad Lake and fishermen spreading nets. I was fortunate enough to see a water snake moving fast in the lake but it missed my lens.
We headed towards Eldho’s place and on the way saw some religious procession on the road. A religious procession
After travelling for around one hour, we reached Hotel

Lovedons in Kolenchery and checked in to an A/C room, as the temperature was very high. By the time a gang of Anglo-Indians, Eldho’s friends in Bangalore, reached the hotel. We took bathed and freshened up, got a call from Eldho and we headed towards his house. The ceremonies were over by the time we reached his house and we met his relatives and family members.
Had a nice dinner and the menu had chicken, rice, moru kolambu, beef and upperi. Met a relative of Eldho whom Viji  called as Ammachi. She was too talkative and she asked my hubby if I was his daughter studying in college. We left the place around 12.30 am, promising them that we would go for the wedding the next day by 10.30-11 am.
Rajeshattan and Vij were supposed to go to dress Eldho by 7.30-8 am the next day…
Posted by Arjunpuri at 11:46

Malik Ambar: The African slave who built Aurangabad and ruined the game for Mughals in the Deccan

The story of Malik Ambar, an African slave turned warrior, is an unusual one. Sold and bought several times by slave dealers during his yo... 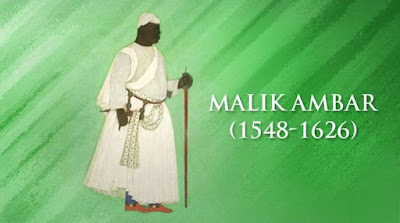